Showing posts from June, 2011
Show all

My choice this week is
In the Forests of Night:The Goblin Wars, Book 2
Author:  Kersten Hamilton.
Publication date: November 22, 2011

From Goodreads:
Teagan, Finn, and Aiden have made it out of Mag Mell alive, but the Dark Man's forces are hot on their heels. Back in Chicago, Tea’s goblin cousins show up at her school, sure she will come back to Mag Mell, as goblin blood is never passive once awoken. Soon she will belong to Fear Doirich and join them. In the meantime, they are happy to entertain themselves by trying to seduce, kidnap, or kill Tea’s family and friends.
Teagan knows she doesn’t have much time left, and she refuses to leave Finn or her family to be tortured and killed. A wild Stormrider, born to rule and reign, is growing stronger inside her. But as long as she can hold on, she’s still Teagan Wylltson, who plans to b…
2 comments
Read more

The Red Scarf by Kate Furnivall
borrowed from the library
Description from Goodreads:
Davinsky Labor Camp, Siberia, 1933: Only two things in this wretched place keep Sofia from giving up hope: the prospect of freedom, and the stories told by her friend and fellow prisoner Anna, of a charmed childhood in Petrograd, and her fervent girlhood love for a passionate revolutionary named Vasily.

After a perilous escape, Sofia endures months of desolation and hardship. But, clinging to a promise she made to Anna, she subsists on the belief that someday she will track down Vasily. In a remote village, she’s nursed back to health by a Gypsy family, and there she finds more than refuge—she also finds Mikhail Pashin, who, her heart tells her, is Vasily in disguise. He’s everything she has ever wanted—but he belongs to Anna.

After coming this far, Sofia is tantalizingly close to freedom, family—even a future. All that stands in her way is the secret past that could endanger everything she has come to…
Post a Comment
Read more

It's Friday! It's the start of the weekend and time for Follow & Feature Friday, hosted by Parajunkee's View.  This week's feature blogger is Mickey @ I'm a Book Shark.

The question for this week:

Q. In light of the Summer Solstice. Also known as Midsummer...let's talk about fairies. What is your favorite fairy tale or story that revolves around the fae?

A. Do I have to pick just one? Because I don't think I can.  I have to choose Tyger Tyger by Kersten Hamilton and the Iron Fae series by Julie Kagawa as my favorite books that revolve around the fae.
5 comments
Read more

What I'm Reading This Week 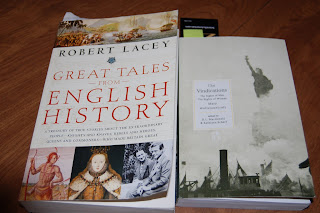 This week I am reading Great Tales from English History by Robert Lacey, The Vindications: The Rights of Men and The Rights of Women by Mary Wollenstonecraft.    As well as


The Beekeeper's Lament by Hannah Nordaus and A Clash of Kings by George R.R. Martin. How is that for variety? Realistically, I won't finish all four books this week, but I plan to finish The Beekeepter's Lament and hopefully, A Clash of Kings. The other two will take more time and effort to finish reading.
1 comment
Read more

The Priest's Graveyard by Ted Dekker
borrowed from library
Description from Goodreads:
The last thing Renee Gilmore remembers is being rescued by a pair of unknown arms after her drug-dealer boyfriend attempts to murder her. She wakes up in a beautiful glass house surrounded by doctors and the man that saved her life, Lamont Myers. Lamont offers her protection, if she abides by his rules. Among these; she must not leave the house, making her the bird in his gilded cage.


Danny Hansen is a Bosnian immigrant who came to America to escape the bloodshed of his country and the memories of his own involvement. Danny is a priest who lives by a strict moral code, one which values the loving of others above all else. It is those that pretend to abide by religious and legal law but intentionally harm others that insence Danny. And he believes it is duty to show them the error of their ways. Those few that admit and renounce their behavior are forgiven and set free, but never without a severe r…
Post a Comment
Read more

It is Follow Friday! Congratulations to Parjunkee's View - this 50 weeks of Feature & Follow Friday!
This week's Feature Blog is Rhiannon Paille. Please check out her blog!

My answer: Okay, that's tough. I like lots of genres but I do know that it was J.R.R. Tolkien's The Lord of the Rings that made me a fantasy/sci fi fan.  That trilogy changed my reading habits forever.

Counting from Zero by Alan B. Johnston
digital galley provided by author for review
Description from Goodreads:
Can a security expert save the Internet from a catastrophic zero day cyber attack by a network of zombie computers, known as a botnet? At what cost? “Credible and believable, this story is told by a subject matter expert. I could not wait to find out what happened next.” – Vint Cerf, Internet pioneer “The threat to the Internet from worms, viruses, botnets, and zombie computers is real, and growing. Counting from Zero is a great way to come up to speed on the alarming state of affairs, and Johnston draws you in with his story and believable cast of characters.” – Phil Zimmermann, creator of Pretty Good Privacy (PGP) the most widely used email encryption program Today, every computer connected to the Internet is under constant attack from viruses, worms, port scans, and spam. Security professionals continually fight to contain newly unleashed cyber attacks, known as ‘zero day…
Post a Comment
Read more

It's Friday again and we all know what that means. Time for some Follow Fun. This meme is hosted by Parjunkee's View. This week's Feature Blogger is Nicki J. Markus.  The question for this week is:


Q. The magic book fairy pops out of your cereal box and says "you and your favorite character (from a book of course) can switch places!" Who are you going to switch with?


My Answer: Wow! Now that is a tough one. I think that I will go with Diana Bishop from A Discovery of Witches. Now, I admit that sometimes she has a hard time accessing her abilities, but she is so smart and I love her area of study and that she gets to do research at Oxford's Bodleian Library. I just finished reading this book and will be reviewing it soon.

A mysterious jewel holds the key to a life-changing secret, in this breathtaking tale of love and art, betrayal and redemption.

When she decides to auction her remarkable jewelry collection, Nina Revskaya, once a great star of the Bolshoi Ballet, believes she has finally drawn a curtain on her past. Instead, the former ballerina finds herself overwhelmed by memories of her homeland and of the events, both glorious and heartbreaking, that changed the course of her life half a century ago.

It was in Russia that she discovered the magic of the theater; that she fell in love with the poet Viktor Elsin; that she and her dearest companions—Gersh, a brilliant composer, and the exquisite Vera, Nina’s closest friend—became victims of Stalinist aggression. And it was in Russia that a terrible discovery incited a deadly act of betrayal—and an ingenious escape that led Nina to the West and eventu…
1 comment
Read more

Marked by P.C. Cast, Kristen Cast
kindle book purchased from Amazon.com
Description from Goodreads:
The House of Night series is set in a world very much like our own, except in 16-year-old Zoey Redbird's world, vampyres have always existed. In this first book in the series, Zoey enters the House of Night, a school where, after having undergone the Change, she will train to become an adult vampire—that is, if she makes it through the Change. Not all of those who are chosen do. It's tough to begin a new life, away from her parents and friends, and on top of that, Zoey finds she is no average fledgling. She has been Marked as special by the vampyre Goddess, Nyx. But she is not the only fledgling at the House of Night with special powers. When she discovers that the leader of the Dark Daughters, the school's most elite club, is misusing her Goddess-given gifts, Zoey must look deep within herself for the courage to embrace her destiny—with a little help from her new vampyre frie…
Post a Comment
Read more

It's Friday again and we all know what that means. Time for some Follow Fun. This meme is hosted by Parjunkee's View. This week's Feature Blogger is Amy at BackseatReader. Amy's question for this week is:

What are you doing to prepare for an upcoming zombie apocalypse and/or the return of Mel Gibson to the silver screen? (Both of which could be terrifying.)

My Answer: Wow! What a great question.  Most of our family has read Max Brooks' Zombie Survival Guide

as well as World War Z
.  Because we are aware of steps to take and have begun our preparations , we feel that we are on the right track. We just need to find a school bus. . .

My recent reading in preparation for the Zombie Apocalyse has been
FEED and Deadline by Mira Grant because when it happens, I want to help the masses survive by getting the information out there.

20 Years Later by Emma Newman
kindle book purchased from Amazon.com
Description from Goodreads:
LONDON, 2012: IT arrives and with that the world is changed into an unending graveyard littered with the bones, wreckage, and memories of a dead past, gone forever.

LONDON, 2032: Twenty years later, out of the ashes, a new world begins to rise, a place ruled by both loyalty and fear, and where the quest to be the first to regain lost knowledge is an ongoing battle for power. A place where laws are made and enforced by roving gangs-the Bloomsbury Boys, the Gardners, the Red Lady's Gang-who rule the streets and will do anything to protect their own.

THE FOUR: Zane, Titus, Erin, Eve. Living in this new world, they discover that they have abilities never before seen. And little do they know that as they search post-apocalyptic London for Titus' kidnapped sister that they'll uncover the secret of IT, and bring about a reckoning with the forces that almost destroyed all of humanity.