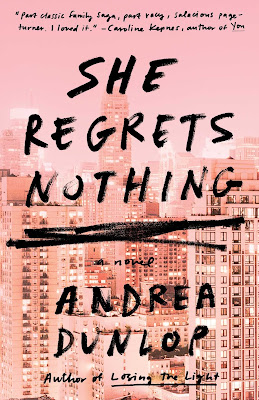 In the tradition of The Emperor’s Children and The House of Mirth,the forgotten granddaughter of one of New York’s wealthiest men is reunited with her family just as she comes of age—and once she’s had a glimpse of their glittering world, she refuses to let it go without a fight.

When Laila Lawrence becomes an orphan at twenty-three, the sudden loss unexpectedly introduces her to three glamorous cousins from New York who show up unannounced at her mother’s funeral. The three siblings are scions of the wealthy family from which Laila’s father had been estranged long before his own untimely demise ten years before.

Two years later, Laila has left behind her quiet life in Grosse Point, Michigan to move to New York City, landing her smack in the middle of her cousins’ decadent world. As the truth about why Laila’s parents became estranged from the family patriarch becomes clear, Laila grows ever more resolved to claim what’s rightfully hers. Caught between longing for the love of her family and her relentless pursuit of the lifestyle she feels she was unfairly denied, Laila finds herself reawakening a long dead family scandal—not to mention setting off several new ones—as she becomes further enmeshed in the lives and love affairs of her cousins. But will Laila ever, truly, belong in their world? Sly and sexy, She Regrets Nothing is a sharply observed and utterly seductive tale about family, fortune, and fate—and the dark side of wealth.

I found the premise of She Regrets Nothing to be very intriguing and I was quickly drawn into this story of a long-lost family member who has suddenly become an orphan - albeit, an adult with a job and an extended family nearby. That is actually part of the issue I had with Laila Lawrence -- she is very ungrateful for what she actually does have in life. She is hateful to people who seem to genuinely want to help her just because they don't measure up to her arbitrary (shallow) standard.

Laila loses her mother, whom she doesn't particularly like or respect. She is in shock and her cousins that she never knew existed show up at the funeral. When she finds out that they are extremely wealthy and her father's side of the family are so wealthy and pretty famous in New York, she gets the idea that she somehow deserves to have the same life. Laila is conniving, deceitful, envious, shallow and a total social climber. She has virtually no redeeming qualities.

Her cousins are spoiled and super wealthy, kind of shallow, but not as hateful as Laila. Liberty, the oldest of the siblings is a really nice person and has no use for the family money. I am pretty certain that Laila isn't supposed to appeal to the reader - at least I hope not. She is just really not likable.

After having said all that --- I actually was unable to put the book down! I enjoyed reading all the drama, the backstabbing and the various scandals . I had fun and read the book in one day. What does that say about me? I had fun reading about Laila's pathetic social climbing and snickering at her shallowness. This was all pretty Gossip Girl -type reading.

But then there were some really awful things that happened to her. But characteristically,  she put herself in some really stupid situations and I kept hoping she would learn from her mistakes. There is one particularly tough part to read where Laila thinks she will use someone who is rich and powerful for her own benefit and social climbing. Unfortunately for her, this person is even more ruthless, uncaring and just awful than she is and things don't turn out at all the way she expected.

There is plenty said about our society, women, what constitutes work, how we think about wealth -- lots of thing touched upon.

I won't give away the big, huge, threw-me-for-a-loop surprise twist to this novel, however. I mean, I really did not see that coming! So, kudos to the author for totally blind-siding me.  I'm sure that She Regrets Nothing won't appeal to everyone - what book does? But if you want a fast-paced, fun, gossipy, novel with some pretty wild twists, check out She Regrets Nothing.

Andrea Dunlop is the author of Losing the Light and Broken Bay, a novella. She lives with her husband in Seattle, Washington, where she works as a social media consultant.