Review: Sharp & Sugar Tooth: Women Up to No Good 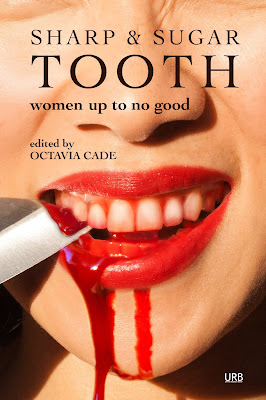 
Sharp & Sugar Tooth: Women Up To No Good is a horror anthology of dark fiction and darker appetites, edited by Octavia Cade. Containing 22 stories of “bad” women, and “good” women who just haven’t been caught yet, it features 22 fearless writers who identify as female, non-binary, or a marginalized sex or gender identity. It’s the third in the Women Up To No Good series, and is forthcoming at the end of 2018.

When I was offered the opportunity to read and review this anthology, I was quite excited by the premise of the collection of short stories. There are twenty-two stories in this collection and they each made an impression on me. I
tried to list my favorites and the list ended up including most of the stories - for varying reasons. The stories include dark fairy tales, horror, sci-fi, fantasy, and a few stories I'm not sure how to categorize.

I find that short story collections take me longer to read and longer to review -- and this particular book even more so. I found that after each story I had to put the book aside so that I could process and ponder what I had just read. Even after a few weeks, I find my mind wandering back to an idea, a character, a situation from the stories and I just sit and think. Sometimes its because it was shocking, sometimes because the situation was heart-breaking, other times its the particular twist of a well-known idea or theme that strikes me. There wasn't a single story that I hated -- and most I really liked. Sharp & Sugar Tooth is definitely a book that I am recommending to my friends - it is a very worthwhile read.

It is hard to pick favorites, but some of the stories that really stick with me are:

"Hungry Daughters of Starving Mothers" by Alyssa Wong. - this is such an amazing story - It is a dark supernatural/horror tale that really sticks with me. Loved it.

"A Lie You Give, and Thus I Take" by Damien Angelica Walters - a different twist on fairy tales. It has layers to the tale - could be about many things, but seems to be a view of abuse told through the words of fairy tales - and I would say it is true to the real purpose of fairy tales.

"A Fish Tale" by Sabrina Vourvoulias - a fish tale -- a great story.  This is one that I will read again for sure.

"Strong Meat" by A. R. Henle - such a thought provoking story. I can't say much or risk giving too much away.

"Alice Underground" by Rachael Sterling. Alice in Wonderland - but out of Wonderland - real? mental illness? So good!

"The Lily and the Horn" by Catherynne M. Valente - a very good tale.

"A Year Without the Taste of Meat" by Erin Horakova - Science Fiction story that takes on different species/cultures. I really liked this one.

Honestly, I could list every story in this collection and tell you something that made an impression on me. However, I would be giving too much away -- these stories deserve to be discovered. Go read Sharp & Sugar Tooth - you won't be disappointed!

The King's Justice by E.M Powell

A murder that defies logic—and a killer on the loose.

England, 1176. Aelred Barling, esteemed clerk to the justices of King Henry II, is dispatched from the royal court with his young assistant, Hugo Stanton, to investigate a brutal murder in a village outside York.

The case appears straightforward. A suspect is under lock and key in the local prison, and the angry villagers are demanding swift justice. But when more bodies are discovered, certainty turns to doubt—and amid the chaos it becomes clear that nobody is above suspicion.

Facing growing unrest in the village and the fury of the lord of the manor, Stanton and Barling find themselves drawn into a mystery that defies logic, pursuing a killer who evades capture at every turn.

Can they solve the riddle of who is preying upon the villagers? And can they do it without becoming prey themselves?

Because I enjoyed all of the Fifth Knight novels, I was really excited to read The King's Justice by E.M. Powell. I love that Powell took a minor character from the other series and made him one of the main protagonists in this new series. I love mystery novels and by combining mystery and historical fiction, Powell has made a fun, clever and really intriguing novel.

Hugo Stanton is a great character - young, troubled, with a strong conscience and a knack for picking up on details. His boss, Aelred Barling, seems as first to be a very stiff, overly formal stick in the mud who isn't too concerned with true justice. But as the novel progresses, he can be seen more clearly -- he is a stickler for rules - and this really doesn't sit very well with young Hugo. But they make a great team, with humor - sometimes very dry on Barling's part and eventually a mutual appreciation for each other's skills and dedication.

This novel was so much fun to read - I read it in basically one sitting. I was really drawn into this murder mystery and Powell did a great job of keeping me off the right track with lots of possible suspects, conflicting motives, some really great characters plus lots of historical detail as an added bonus. I was glad the story went in such a different direction than I was expecting -- I love to be surprised by mysteries.

The King's Justice is a novel that I can wholeheartedly recommend and I am eagerly looking forward to reading the next book in the series.

E.M. Powell’s historical thriller Fifth Knight novels have been #1 Amazon and Bild bestsellers. The King’s Justice is the first novel in her new Stanton and Barling medieval murder mystery series. She is a contributing editor to International Thriller Writers’ The Big Thrill magazine, blogs for English Historical Fiction Authors and is the social media manager for the Historical Novel Society.

Born and raised in the Republic of Ireland into the family of Michael Collins (the legendary revolutionary and founder of the Irish Free State), she now lives in North-West England with her husband, daughter and a Facebook-friendly dog.

Friday, June 1
Interview at Passages to the Past

Thursday, June 7
Feature at Encouraging Words from the Tea Queen

Saturday, June 16
Review at Clarissa Reads it All

Monday, July 2
Interview at Reading the Past

During the Blog Tour we will be giving away 6 paperback copies of The King's Justice! To enter, please enter via the Gleam form below.

Giveaway Rules
– Giveaway ends at 11:59pm EST on July 13th. You must be 18 or older to enter.
– Giveaway is open INTERNATIONALLY.
– Only one entry per household.
– All giveaway entrants agree to be honest and not cheat the systems; any suspect of fraud is decided upon by blog/site owner and the sponsor, and entrants may be disqualified at our discretion.
– Winner has 48 hours to claim prize or new winner is chosen.
The King's Justice