Showing posts from July, 2012
Show all

The Thing About Thugs 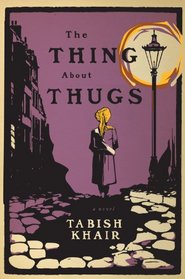 The Thing About Thugs by Tabish Khair
ARC provided by the publisher through TLC Book Tours
Description from back cover of the book:
In a small Bihari village, Captain William T. Meadows finds just the man to further his phrenological research back home: Amir Ali, confessed member of the infamous Thugee cult. With tales of a murderous youth redeemed, Ali gains passage to England, his villainously shaped skull there to be studied. Only Ali knows just how embroidered his story is, so when a killer begins depriving London’s underclass of their heads, suspicion naturally falls on the “thug.” With help from fellow immigrants led by a shrewd Punjabi woman, Ali journeys deep into a hostile city in an attempt to save himself and end the gruesome murders.
Ranging from skull-lined mansions to underground tunnels concealing a ghostly people, The Thing about Thugs is a feat of imagination to rival Wilkie Collins or Michael Chabon. Short-listed for the 2010 Man Asian Literary Prize, this Victorian r…
2 comments
Read more

The Prisoner of Heaven 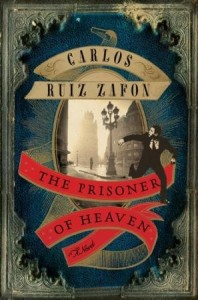 The Prisoner of Heaven by Carlos Ruiz Zafon
review copy provided by Harper Collins via TLC Book Tours
Description from book cover:
The internationally acclaimed New York Times bestselling author Carlos Ruiz Zafón takes us into a dark, gothic Barcelona and creates a rich, labyrinthine tale of love, literature, passion, and revenge in which the heroes of The Shadow of the Wind andThe Angel’s Game must contend with a nemesis that threatens to destroy them.

Barcelona, 1957. It is Christmas, and Daniel Sempere and his wife, Bea, have much to celebrate. They have a beautiful new baby son named Julián, and their close friend Fermín Romero de Torres is about to be wed. But their joy is eclipsed when a mysterious stranger visits the Sempere bookshop and threatens to divulge a terrible secret that has been buried for two decades in the city’s dark past. His appearance plunges Fermín and Daniel into a dangerous adventure that will take them back to the 1940s and the early days of Franco’s dictator…
1 comment
Read more 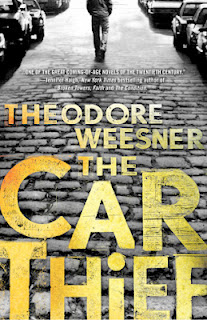 The Car Thief by Theodore Weesner
ARC provided by Blue Dot Literary
Description from Goodreads:
It’s 1959. Sixteen year-old Alex Housman has just stolen his fourteenth car and frankly doesn’t know why. His divorced, working class father grinds out the night shift at the local Chevy Plant in Detroit, kept afloat by the flask in his glove compartment and the open bottles in his Flint, Michigan home.

Abandoned and alone, father and son struggle to express a deep love for each other, even as Alex fills his day juggling cheap thrills and a crushing depression. He cruises and steals, running from, and to, the police, compelled by reasons he frustratingly can’t put into words. And then there’s Irene Shaeffer, the pretty girl in school whose admiration Alex needs like a drug in order to get by. Broke and fighting to survive, Alex and his father face the realities of estrangement, incarceration, and even violence as their lives hurtle toward the climactic episode that a New York Times reviewer…
1 comment
Read more
More posts