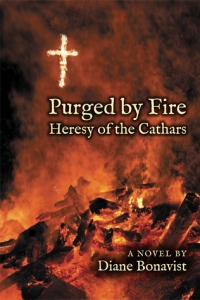 Purged by Fire: Heresy of the Cathars

In the thirteenth-century, a unique civilization flourished in the region that is now Southwestern France. The tolerant rulers of this realm embraced the Cathar faith which kept the simple teachings of the early followers of Christ, and rejected the venality of the Catholic Church.

To destroy the heretical faith, the pope declared a holy war. With the infamous words “Kill them all, God will recognize his own,” the crusade against Christendom began. For two decades, these wars decimated the old regions of the Languedoc and the troubadour culture. But when they still failed to destroy the heretical faith, the papacy gave special powers of inquisition to Dominican monks. Their mission was to root out heretics, compel confessions, and burn the unrepentant at the stake.

Purged by Fire tells the intertwining stories of three people enmeshed in the treachery of the Inquisition. Isarn Benet believes he has survived the wars by accepting the pope’s will and the French rule, until Marsal, the child he once rescued, arrives on his doorstep, forcing him to question every conciliation he has ever made. Marsal has lost everything to the Inquisition. Raised to always turn the other cheek, now she wants back what the Catholic Church has stolen, and she will aid anyone who helps her do so, even outlaws and rebels. Isarn’s son Chrétien can barely remember his life as a soldier and troubadour, the time before he knew and loved Marsal. Condemned and hunted by the Catholic Church, the two escape to the mountain fortress of Montségur.

Here, as the forces of the Inquisition lay siege to their place of refuge, they must make one final choice—between life and love or death and faith!

I think that given that the book is about the inquisition, and in particular, how the Church went after the Cathars, one can easily conclude that the novel will be a sad and dark tale. Purged by Fire tells the story of three main characters, Marsal, Chetien, and Isarn. Their stories are intertwined -- more than some of them even know. So much of the story depends on the reader not knowing certain information too soon, so I want to avoid giving away anything of importance.

I was especially intrigued by the detail given to day to day life of the people - Marsal and her grnadmother, Tibors, in particular. The happy life they led was not to last - tragedy hits, but then cruelty is added on top of that. The cruelty and greed that played into loss of property and life is detailed and explained as well. The whole historical period and the episodes described in the novel are quite upsetting.  I found the descriptions of the day to day religious life of the Cathars to be just as interesting as the historical period.

I felt that the author did a nice job of exploring the various players in the events and helped to bring this sad period to life through her characters. Purged by Fire isn't a light historical novel by any means. It deals with a dark period in history and terrible things occurred. But for those who enjoy learning about history through fiction, I feel it is a good book for learning about the crusade against the Cathars.

Diane Bonavist’s fiction has appeared in Tiferet Journal, The Milo Review, Fable Online, and The RavensPerch. She is a former Editor in chief of Tiferet Journal. Her other novels are Daughters of Nyx, a mystery of ancient Greece and Waters and the Wild, a multi-generational story set in the Hudson River Valley, both to be published in 2017. Visit her website.

You can enter the global giveaway here or on any other book blogs participating in this tour. Be sure to follow each participant on Twitter/Facebook, they are listed in the entry form below.

Visit each blogger on the tour: tweeting about the giveaway everyday of the Tour will give you 5 extra entries each time! [just follow the directions on the entry-form] Global giveaway - international: 5 winners will receive a kindle/mobi copy of this book

CLICK ON THE BANNER TO READ REVIEWS AND AN EXCERPT