Showing posts from February, 2013
Show all

The First Warm Evening of the Year Blog Tour and Review 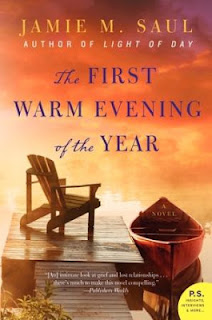 Geoffrey Tremont is untroubled by his neat, contented bachelor life in bustling New York City. On an ordinary day, Geoffrey arrives home to find a letter awaiting him with a postmark from an unfamiliar town: Shady Grove, New York. An old friend has named him the executor of her estate. Twenty years ago, in college, Geoffrey and Laura Welles had been each other’s confidant; as their lives diverged, they went their separate ways. Now she’s reached out of the past to ask him a final favor.
Traveling up to Laura’s hometown, Geoffrey meets Marian Ballantine. A widow living in the shadow of an idyllic marriage and now grieving the loss of her best friend, Marian knows a lot about Geoffrey. Laura often spoke of him, she tells him, and though he’s flattered, he’s also thrown off balance. From the moment he first sees her, Geoffrey instinctively knows this attractive,…
1 comment
Read more 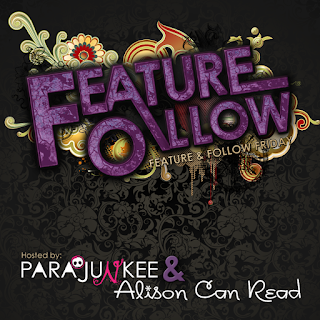 I haven't participated in Feature & Follow in a while, so I'm joining in once again. This is a fun way to find some new blogs and add followers. Feature & Follow is hosted by Parajunkee of Parajunkee's View and Alison from Alison Can Read. Be sure to follow them and the Featured blog and enjoy this week's Feature question.

Our Feature is Jelly of Jelly’s InsiderWhen did you start blogging?
January 2013. I am a newbie though I have been writing reviews on goodreads for a year now.
What is your favorite part of book blogging?
Meeting new people. As cliche as that sounds, I love people! Unfortunately, nobody in my life is as much of a book nerd as I am. If I can’t find someone to confess my book obsessions to, I’ll explode. I think the whole book blog community is a great way for authors,publishers, and readers to get together and share their interest.
What type of books do you mainly blog about?
Mostly YA fantasy, paranormal, and dystopian fiction. I also lik…
5 comments
Read more 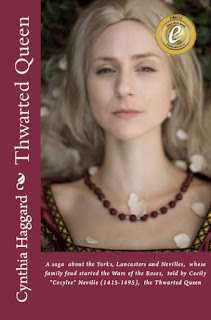 THWARTED QUEEN is a portrait of a woman trapped by power, a marriage undone by betrayal, and a King brought down by fear.
Cecylee is the apple of her mother’s eye. The seventh daughter, she is the only one left unmarried by 1424, the year she turns nine. In her father’s eyes, however, she is merely a valuable pawn in the game of marriage. The Earl of Westmorland plans to marry his youngest daughter to 13-year-old Richard, Duke of York, who is close to the throne. He wants this splendid match to take place so badly, he locks his daughter up.
The event that fuels the narrative is Cecylee’s encounter with Blaybourne, a handsome archer, when she is twenty-six years old. This love affair produces a child (the “One Seed” of Book II), who becomes King Edward IV. But how does a public figure like Cecylee, whose position depends upon the goodwill of her husband, carry o…
Post a Comment
Read more 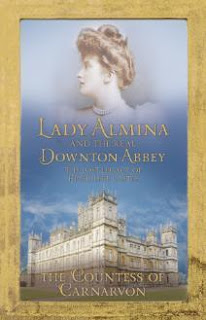 Lady Almina and the Real Downton Abbey by The Countess of Carnarvon
Kindle edition purchased from amazon.com
Description from Goodreads:
Lady Fiona Carnarvon became the chatelaine of Highclere Castle - the setting of the hit series Downton Abbey - eight years ago. In that time she's become fascinated by the rich history of Highclere, and by the extraordinary people who lived there over the centuries.

Almina was the illegitimate daughter of banking tycoon Alfred de Rothschild. She was his only daughter and he doted on her. She married George, the Earl of Carnarvon, at 19 with an enormous dowry.

At first, life at Highclere was a dizzying mix of sumptuous banquets for 500 and even the occasional royal visitor. Almina oversaw 80 members of staff - many of whom came from families who had worked at Highclere for generations.

But when the First World War broke out, life at Highcl…
3 comments
Read more

How Literature Saved My Life 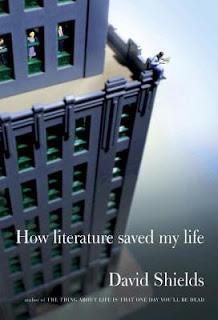 How Literature Saved My Life by David Shields
digital review copy provided by Knopf via edelweiss
Summary:
"Reading How Literature Saved My Life is like getting to listen in on a really great, smart, provocative conversation. The book is not straightforward, it resists any single interpretation, and it seems to me to constitute nothing less than a new form." --Whitney Otto

In this wonderfully intelligent, stunningly honest, painfully funny book, acclaimed writer David Shields uses himself as a representative for all readers and writers who seek to find salvation in literature.