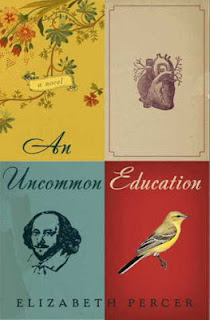 An Uncommon Education by Elizabeth Percer
review copy provided by TLC Book Tours via Harper Collins
Description from Goodreads:
Afraid of losing her parents at a young age—her father with his weak heart, her deeply depressed mother—Naomi Feinstein prepared single-mindedly for a prestigious future as a doctor. An outcast at school, Naomi loses herself in books, and daydreams of Wellesley College. But when Teddy, her confidant and only friend, abruptly departs from her life, it's the first devastating loss from which Naomi is not sure she can ever recover, even after her long-awaited acceptance letter to Wellesley arrives.

Naomi soon learns that college isn't the bastion of solidarity and security she had imagined. Amid hundreds of other young women, she is consumed by loneliness—until the day she sees a girl fall into the freezing waters of a lake.

The event marks Naomi's introduction to Wellesley's oldest honor society, the mysterious Shakespeare Society, defined by secret rituals and filled with unconventional, passionate students. Naomi finally begins to detach from the past and so much of what defines her, immersing herself in this exciting and liberating new world and learning the value of friendship. But her happiness is soon compromised by a scandal that brings irrevocable consequences. Naomi has always tried to save the ones she loves, but part of growing up is learning that sometimes saving others is a matter of saving yourself.

An Uncommon Education is a compelling portrait of a quest for greatness and the grace of human limitations. Poignant and wise, it artfully captures the complicated ties of family, the bittersweet inevitability of loss, and the importance of learning to let go.


I thought that An Uncommon Education  was just beautiful – from the cover, to the settings, to the story itself.  I love the way Percer writes . She writes in long, flowing sentences that seem to meander through thoughts and history.  After Naomi’s father has a heart attack: “I walked away from that hospital believing that I could one day learn to heal,  that healing itself was something that could be hounded and captured, like a quarry that only needed to be chased to be won. It was a belief so strong that I would continue to build myself upon it, unable to let it go until I had tried and failed to save three of the people I most loved: two who, at very different times in my life and in very different ways, became the sort of friends we think we might never be able to live without, and then my mother, who in the end might have saved me.”


An Uncommon Education is one of those exquisite books that I have a difficult time writing about because I don’t want to mess up my review and inadvertently keep someone from reading it.  The first  part of the book details Naomi’s childhood and her father’s attention to her education. Naomi went to school, but her father also spent a great deal of time supplementing her education. I loved the details about all the books he gave her to read, all the museums they would visit and his gentle, loving lessons about life. As a homeschooling mom, I love these details.  Naomi’s mother is seriously depressed and this puts a strain on the family and Naomi’s social life. But being such a book worm and not susceptible to the shallow life views of most of her classmates, she had few friends anyway.  Well, until Teddy moves in next door. The arrival of Teddy begins the next phase of Naomi’s life.  About this time Naomi is falsely accused of cheating and this is another of the big defining moments in her young life.  She comes to understand that not everyone has the extraordinary memory that she has and some people will be jealous and make false accusations.
Teddy and Naomi have a special friendship and his abrupt departure from her life has a profound effect on her life. Naomi throws herself into her studies, work and running to get through her unhappiness.  She manages to be a top student and get into her dream school, Wellesley. Once she goes off to school, she thinks things will fall into place for her. Unfortunately, things don't usually work out quite that neatly and they don't for Naomi either.  I particularly enjoyed the college years as described by Percer.  So many things about her descriptions rang true for me. Naomi seems somewhat overwhelmed and continues to be sad and lonely until she happens upon a fellow student as she falls or jumps into a freezing lake. This is the catalyst for Naomi joining The Shakespeare Society and finding some real friends among the passionate, quirky members.

While Naomi seems pretty passive through a great deal of her college years, I thought that in a lot of ways this was an accurate picture of how college life can seem sometimes. Things are happening so fast and the students are so busy with classes, studying, writing papers, social activities, trying to figure out who they are and who they want to be. Even though Naomi is certain she wants to be a doctor, she spends far more time working on performances of Shakespeare plays with the society than she probably should and she just can't seem to make herself do the things she know she should do in order to get admitted to a prestigious medical school. The scandal involving her close friend and her mother's advancing illness  help her to finally figure out what she really wants to do and the person she wants to be. I was so happy to see the maturing Naomi discover herself and make decisions as an adult and not stubbornly following an idea she had as a child.
This book was just a joy to read. I plan to read it again this summer. I highly recommend it. Amazon has chosen An Uncommon Education as one of their Top 10 books for the month of May, and I can definitely see why. (You can see the official Best Books of the Month page here.) 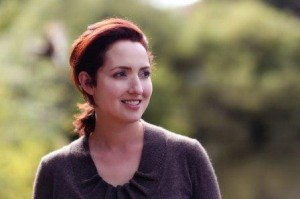 About Elizabeth Percer
Elizabeth Percer is a three-time nominee for the Pushcart Prize and has twice been honored by the Dorothy Sargent Rosenberg Foundation. She received a BA in English from Wellesley and a PhD in arts education from Stanford University, and completed a postdoctoral fellowship for the National Writing Project at UC Berkeley. She lives in California with her husband and three children. An Uncommon Education is her first novel.