The Roots of the Olive Tree 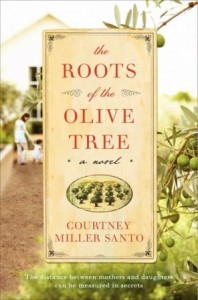 The Roots of the Olive Tree by Courtney Miller Santo
Review copy provided by Harper Collins via TLC Book Tours
Description from Goodreads:

Five generations of firstborn Keller women live in the same house on an olive grove in secluded northern California. Matriarch Anna is 112 and trying to be the oldest woman in the world-and succeeding heartily. Her daughter Bets, granddaughter Callie, great-granddaughter Deb, and great-great granddaughter Erin are also defying longevity norms. When a geneticist comes to study the women at the same time Erin announces she is pregnant with a firstborn boy, the Kellers′ roots are shaken wide open. Told in the third-person perspective of each of the women, the story and mystery of their existence is revealed in compulsive prose and compassionate drive.

My take:
Have you ever read a book where you thought, "I wish I knew these people. I want to talk to these people?" Well, I have and I want to know Anna from The Roots of the Olive Tree.  Anna is the matriarch of the Keller family and at 112 years old, she is still active both physically and mentally. I loved the way her life unfolded story by story. The reader is given the final product -- Anna at 112 years old - and she is such a great character. Feisty, wise, curious, Anna thinks she is set in her ways, but she is still interested in the world and in living. We are treated to small glimpses into her life - small pieces of the puzzle that come together to make the mature woman - which are interspersed within the current story.

One of my favorite passages about Anna occurs pretty early in the book and, for me, set the tone for Anna for the remainder of the book:


All that the generations beneath her did not know worried Anna. She wanted to find someone who would listen to her. Really listen. The world hated old people. Even her own family thought they'd learned all they needed to know from Anna. She was no longer consulted, and she couldn't start a story without her daughter, or granddaughter, interrupting to finish it for her. They had no perspective, no understanding of how much still needed to be preserved. It would take a lifetime to tell them her secrets, and Anna had already lived two lifetimes. p.7

Each generation of the Keller women is given her chance to tell her own life stories. Each woman is very different from the next, but they all have a strong family connection. A mother-daughter relationship may be strained, but the grandmother-granddaughter relationship fills any gaps. I loved the way this connection between generations is slowly developed so that the reader discovers the layers of relationship and understanding there is between these women.

This is a wonderful book about family, living life well, accepting people for who they are, loving, forgiving, adapting, continuing on. The common idea running through the story of living a long life and how that might be attained is fun, educational and inspirational. I don't know if there are any definite answers, but the story is wonderful and maybe just loving the life you live is an answer, but maybe not the answer.

The Roots of the Olive Tree is a book that I will be recommending to everyone who will listen to me. I loved the characters - especially Anna. I  also enjoyed reading about the olive trees, olive oil and all the lore surrounding them.

The thing I think I loved the most was the family story -  the family secrets that were kept, discovered, or revealed and the ordinary stories that became part of the family lore and ritual of bedtime stories.

Courtney Miller Santo grasped the importance of stories from listening to her great-grandmother, who lives in Northern California. She learned to write stories in the journalism program at Washington and Lee University and then discovered the limits of true stories working as a reporter in Virginia. She teaches creative writing at the University of Memphis, where she earned her MFA. Her work has appeared or is forthcoming in The Los Angeles Review, Irreantum, Sunstone, and Segullah. She lives in Tennessee with her husband, two children, and dog. Her most prized possession is a photo of five generations of the women in her own family.