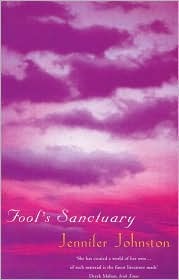 Fool's Sanctuary by Jennifer Johnston
book purchased from Kennys Bookshop
Summary from back of book:
The Great War is over; but the war in Ireland is only just beginning, as the IRA and the Black and Tans move on to the attack. It all seems very remote to Miranda Martin, during that miraculous Indian summer.

Her father, hoping to forget his dead wife, thinks of nothing but his trees; Miranda thinks of the future, a future which must surely include Cathal, who brings news from Dublin. Everything seems calm and serene.

But then Andrew, her officer brother, comes home, bringing his eccentric, likeable friend Harry, and as the Indian summer fades, the scent is set for tragedy.

My take:
For such a short novel, it is quite powerful. The beginning of Fool's Sanctuary takes place much after the main action of the novel. It is retold in the flashbacks of a seemingly very old and frail Miranda Martin.  The novel begins:


There are no new days ahead of me.
Is this what they meant by limbo?
Waiting time, floating time, time for snatching at the comfortable and uncomfortable
moments of the past.


It is so sad and sort of ethereal. In the flashbacks to that fateful summer that changed all their lives forever, Miranda seemed to be so sheltered from what was going on in the world and in Ireland all round her.  She and her father seemed to inhabit a quiet oasis in the midst of turmoil. Unfortunately, such a state cannot exist indefinitely.

There is much left unsaid and the reader must gather it as the story unfolds.  Her father seems to be trying to cope with his wife's death by plunging himself into his work. He is a sharp contrast to his son, Andrew, who finds his father's work and his way of life contemptible. Andrew is full of anger and violence -at whom he is angry is somewhat in doubt. He seems to be angry with everyone.

Like most Irish novels, Fool's Sanctuary is quite sad. It is quite effective at shining a light on a time in Irish history that many in America are only vaguely aware if they are aware of it at all.