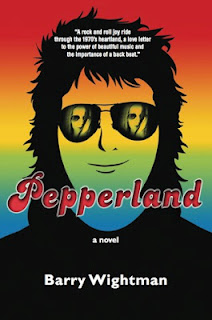 Pepperland by Barry Wightman
review copy provided by publisher via JKSCommunications in return for a fair and honest review
Book synopsis:

What happens when one revolution dies and a new one begins?

She asks him—do you want to play your little rock ‘n roll songs or change the world? He says—both.

Pepperland is a ‘70s rock and roll race through the heartland of America—a love letter to the power of new-fangled computers and the importance of a guitar pick. Pepperland is about missing information, missing people, missing guitars, paranoia, Q & A, brothers, revolution, Agents of the Federal Government, IBM, Hugh Hefner, a Dark Stranger, love, death and the search for it amidst the wreckage of recession-wracked, entropically rundown mid-seventies America.


My Take:
Pepperland by Barry Wightman is an unusual, funny, nerdy, musical, trippy, wild, roller coaster ride of a book. I've never had such a hard time trying to describe a book before -- especially a book that I had such a fun time reading.

I loved the way that the book is divided into "Sides" and "Tracks" in reference to, yes, vinyl records. Remember those? And Pepper, the hero of the book, works in an actual record store. There is so much nostalgia in this book for those of us who can remember the days before cd's, cell phones, and laptops, and when we would carry change to use a pay phone and personal computers were just, well, a cool idea that hadn't quite made it yet and IBM was still the force to be reckoned with.

The love of Pepper's life is Sooz, a beautiful, extremely intelligent but impulsive young woman who gets in trouble with the law in her quest for pursuing what she feels is right . She comes back into his life just as he and his band seem to be on the path to success. Things happen quickly and there seems to be a groove going in their lives. Interestingly, and maybe not coincidentally, this is about the same time as a dark stranger appears at important moments - or is this some kind of mystical experience? It's hard to tell exactly what is happening in this regard. Regardless, it all makes for a great story. There is even a great villain of sorts - a member of the band who happens to be an accordion-playing insurance salesman. I mean, how perfect is that?

It seems to me that Pepperland is about music, technology, love, the pursuit of happiness, growing up and really just the love of life. If you like music, computers, nostalgia, the 70's, or just a really fun story, you should really read Pepperland.

A rock ‘n’ roller at heart, Barry Wightman blends music, mayhem and love in his debut novel Pepperland due out this spring from Running Meter Press.
Born in St. Louis, raised in Chicago and New England, Barry, a business major at Principia College in southern Illinois, claims he should’ve been an English major. Living for many years in Chicago and Minneapolis, he raised a family with his wife Jill, and spent thirty years in the high tech industry, traveling the world, spending time in Silicon Valley, with countless trips to Asia, Australia, and much of the rest of the world. After all that, he earned an MFA from the Vermont College of Fine Arts in 2010. He currently serves as the marketing guy at Forward Health Group, Inc. of Madison, WI.
Barry is Fiction Editor for Hunger Mountain, a literary journal of the arts based in Montpelier, Vermont. He is a talented voiceover professional and a Wisconsin Broadcasters Association award-winning essayist, whose work has been heard on WUWM Milwaukee Public Radio.
He’s also a reviewer and review editor for the Washington Independent Review of Books. His music and book reviews have also appeared in various publications in Chicago, Milwaukee and Washington D.C. He is a voting member of the National Book Critics Circle.
Barry has lived in Elm Grove, Wisconsin since 2005. He is married with three grown children and plays guitar and keyboards in a rock ‘n’ roll band, The Outta State Plates.

You can find out more about the author at his website or at his blog.

Want to read more about Pepperland? Check out the rest of the tour: