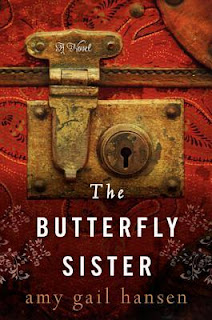 The Butterfly Sister by Amy Gail Hansen
Publication date: August 6, 2013
Publisher: William Morrow
Source: publisher provided a copy for a honest review
Description from Goodreads:
"My past was never more than one thought, one breath, one heartbeat away. And then, on that particular October evening, it literally arrived at my doorstep."

Eight months after dropping out of Tarble, an all-women's college, twenty-two-year-old Ruby Rousseau is still haunted by the memories of her senior year-a year marred by an affair with her English professor and a deep depression that not only caused her to question her own sanity but prompted a failed suicide attempt.

And then a mysterious paisley print suitcase arrives, bearing Ruby's name and address on the tag. When Ruby tries to return the luggage to its rightful owner, Beth Richards, her dorm mate at Tarble, she learns that Beth disappeared two days earlier, and the suitcase is the only tangible evidence as to her whereabouts.

Consumed by the mystery of the missing girl and the contents of the luggage-a tattered copy of Virginia Woolf's A Room of One's Own, the book on which Ruby based her senior thesis, and which she believes instigated her madness-she sets out to uncover the truth, not only about Beth Richards's past but also her own. In doing so, Ruby is forced to reexamine the people from her past: the professor who whisked her away to New Orleans and then shattered her heart and the ghosts of dead women writers who beckoned her to join their illustrious group. And when Ruby's storyline converges with Beth's in a way she never imagined, she returns to the one place she swore she never would: her alma mater.

My Take:
I picked The Butterfly Sister out of the stack of books to be read as a quick break from the succession of historical fiction that I have been reading lately. I am so happy that I did. This book was such a pleasant surprise. I expected to be entertained and diverted, but I wasn't expecting it to be as good as it was.

I loved all the references to women writers, particularly Virginia Woolf, and the connections to Ruby and her own fragile mental state. The story line regarding depression, madness and suicide attempts was interesting, thoughtful and very important to the story. Even while Ruby is rushing headlong to try to solve the mystery of her missing friend, the novel also addresses some of the issues regarding women writers, creativity, links with depression, scholarly life  - and then brings it all back around and together in a clever and surprising way.

I love fiction that references other fiction and writers and readers. This book has all that, plus it has a mystery, suspense, some romance, some revenge, some crazy, and some really great twists. This was fun from start to finish. I don't want to give anything away, because this one needs to be discovered by the reader.