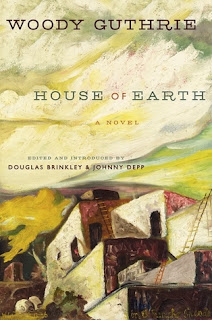 House of Earth by Woody Guthrie
Publication date: February 5, 2013 by Harper Collins
Source: Publisher via TLC Book Tours for an honest review
Synopsis:
Finished in 1947, House of Earth is Woody Guthrie’s only fully realized novel—a powerful portrait of Dust Bowl America, filled with the homespun lyricism and authenticity that have made his songs a part of our national consciousness.

Tike and Ella May Hamlin struggle to plant roots in the arid land of the Texas Panhandle. The husband and wife live in a precarious wooden farm shack, but Tike yearns for a sturdy house that will protect them from the treacherous elements. Thanks to a five-cent government pamphlet, Tike has the know-how to build a simple adobe dwelling, a structure made from the land itself—fireproof, windproof, Dust Bowl–proof. A house of earth.

Though they are one with the farm and with each other, the land on which Tike and Ella May live and work is not theirs. Due to larger forces beyond their control—including ranching conglomerates and banks—their adobe house remains painfully out of reach.


A story of rural realism, and in many ways a companion piece to Guthrie’s folk anthem “This Land Is Your Land,” House of Earth is a searing portrait of hardship and hope set against a ravaged landscape.

I have mixed feelings about House of Earth by Woody Guthrie. There are places in the book where I could really appreciate his poetic and musical writing. Some of his descriptions are quite good and do relay what I think was the desired effect and invoke the desired response from the reader. But, unfortunately, most of the time I was annoyed. First, I have a real problem with most of the dialogue between Tike and Ella. I grew up in Oklahoma and my family has lived there since before it was a state and I don't know anyone who speaks like this. Despite the numerous times that Guthrie says that these people are noble and intelligent and whatever, the dialogue does not support this and just makes them seem stupid and closed off from the rest of the world. There are some authentic phrases used and those were fun to read because I haven't heard them since my grandparents were alive, but for the most part, the dialogue didn't seem real to me. The relationship between Tike and Ella seemed contrived and while it did convey that their physical relationship was a big part of what made them happy together, I really would have preferred to read much much less about that aspect of their lives. (The sex scenes go on for pages.)  It does seem to convey, at least in part, how there isn't much else that is enjoyable in their lives and their struggle to keep ahead of the dust and keep the house standing and their general insecurity about having a place to live.

This book frustrates me because I like Woody Guthrie as a musician and I sympathize with his political ideas.  But I found his writing of dialogue to be annoying and I don't think he should have written sex scenes - ever. That part of the book was just not a pleasant reading experience.

At the same time, some of the descriptions of the landscape and the general descriptions of life for the people living such a hard existence in this barren area were really quite beautiful and poignant. So, I am torn in my feelings about House of Earth. I truly wish that I had enjoyed the book more, but that is just my response to the book. I think there is definitely an audience for the book; sadly, I am just not the audience.  I don't know that it would appeal to everyone, but if you are a fan of Woody Guthrie and want to sample his writing outside of his music, this would be the opportunity. This book might also appeal to those who are interested in a general sense of the hardship of life during the Great Depression and Dust Bowl in Texas and/or Oklahoma.