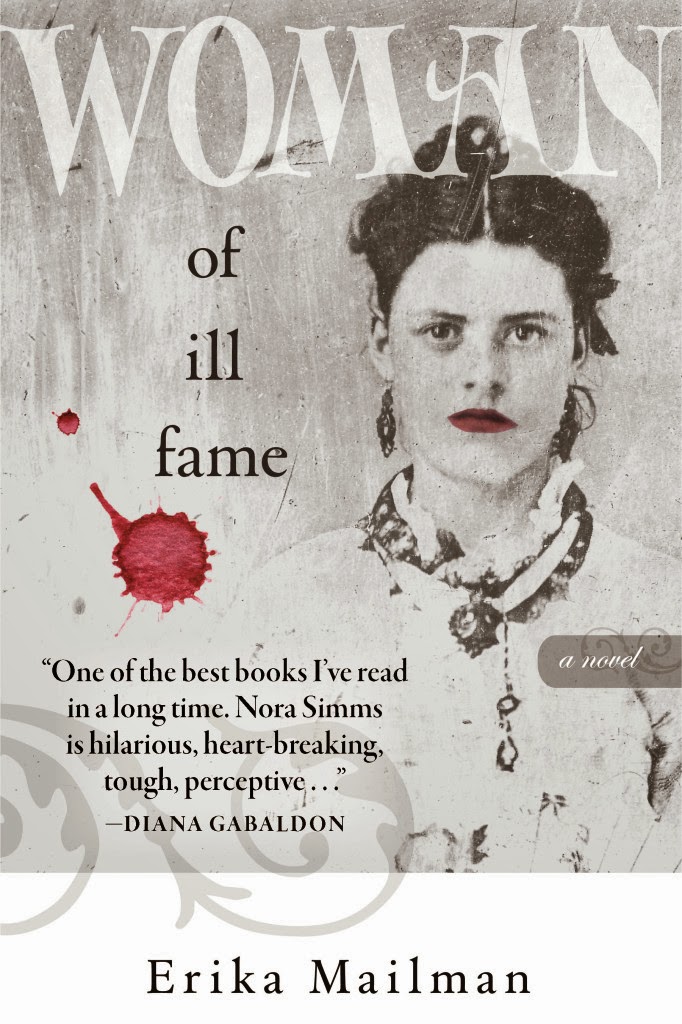 Woman of Ill Fame by Erika Mailman
eBook Publication date: November 11, 2013 ( ASIN: B00GM1VHV2)
Source: eBook provided by author via Historical Fiction Virtual Book Tours for an honest review
Synopsis:
Looking for a better life, Nora Simms sails from the East Coast to gold rush San Francisco with a plan for success: to strike it rich by trading on her good looks. But when a string of murders claims several of her fellow “women of ill fame,” Nora grows uneasy with how closely linked all of the victims are to her. Even her rise to the top of her profession and a move to the fashionable part of town don’t shelter her from the danger, and she must distinguish friend from foe in a race to discover the identity of the killer.

I didn't really know what to expect when I started reading Woman of Ill Fame. I'm not usually that crazy about reading books about prostitutes, but the premise on this one sounded promising. I started reading it to get an idea of what was in store for me, and I ended up reading for hours. I found Nora to be just so funny and straightforward about her chosen profession. She had her reasons for her choice and she lived with it.

This book is much more than just a tale of the prostitute with a heart of gold. The mystery of who is brutally killing the prostitutes in San Francisco is interesting and creepy and I really enjoyed reading about how Nora gets involved and how she goes about gathering her information to try to find the killer. I found it a little funny how Nora puts certain events together and despite all her efforts, the volunteer police force just doesn't figure anything out.

I enjoyed the development of friendship between Nora and her landlady, Mehitabel Ashe (what a name!). Mehitabel is an upright woman who manages her home as a boarding house and takes in sewing and such to make ends meet. Nora is certain that she would not approve of her choice in profession.  Mehitabel absolutely does not approve, but she turns out to be much more understanding than Nora thought she would be. Mehitabel ends up being a real friend and a good person. She is a great example of some of  the character development in the book. She has her own story to tell and she doesn't give up on Nora.

Nora does want out of the life she is living, but she has a certain idea of what type of man would sweep in and take her away from the life. Her preconceived ideas are a disadvantage and almost bring her to harm. Fortunately for her, a man not from her dreams decides to be a real friend. Abe is different, a bit slow, and the brunt of much teasing from the other men in town. He becomes a favorite of Nora's and his character development and story arc are highlights of the book. There seems to be a theme about assuming things about people and being proven wrong throughout the book.

In the end though, it is the character of Nora that carries the whole book. She is just so funny and smart. I really enjoyed her and her constant striving to better her life. Despite her goals and her attempts to pull herself out of the life no matter the cost, she always does what her heart tells her - despite what her brain is telling her. Nora is just a great character. I would love to read more about what happens to her. I highly recommend this book. It is a great read.

Erika Mailman is the author of The Witch’s Trinity, a Bram Stoker finalist and a San Francisco Chronicle Notable Book, and Woman of Ill Fame, a Pushcart Press Editor’s Book Award nominee. While writing The Witch’s Trinity, she learned she was the descendant of a woman accused twice of witchcraft in the decades predating Salem.
For more information please visit Erika Mailman’s website and blog.

Friday, December 20
Review at CelticLady’s Reviews
Review at Confessions of an Avid Reader