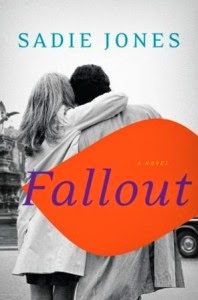 Fallout by Sadie Jones
Publication date: April 29, 2014 by Harper
Source: publisher via TLC Book Tours for an honest review
Synopsis:
Luke Kanowski is a young playwright— intense, magnetic, and eager for life. He escapes a disastrous upbringing in the northeast and, arriving in London, meets Paul Driscoll, an aspiring producer, and the beautiful, fiery Leigh Radley, the woman Paul loves.
The three set up a radical theater company, living and working together; a romantic connection forged in candlelit rehearsal rooms during power cuts and smoky late-night parties in Chelsea’s run-down flats. The gritty rebellion of pub theater is fighting for its place against a West End dominated by racy revue shows and the giants of twentieth-century drama.
Nina Jacobs is a fragile actress, bullied by her mother and in thrall to a controlling producer. When Luke meets Nina, he recognizes a soul in danger—but how much must he risk to save her?
Everything he has fought for—loyalty, friendship, art—is drawn into the heat of their collision. As Luke ricochets between honesty and deceit, the promise of the future and his own painful past, the fallout threatens to be immense.

My Take:
Fallout really intrigued me. This is the first book by Sadie Jones that I have read, so I had no idea what to expect. I found her depiction of 1970's London and the Theater scene to be very well written and I felt that I was able to get a very good mental picture of the people, the buildings, the life.

The characters are interesting because they seem true, gritty, flawed, and many of them are wounded. Luke Kanowski, the young, brilliant writer, is the best developed and is sympathetic despite his emotional ineptitude. He is able to write real people into his plays, but he is barely able to deal with actual people.

His friends, Paul and Leigh, are the other two people in their little relationship triangle. The friendship shared by the three is complicated and difficult. The other main character is Nina, a fragile and emotionally wounded actress that Luke immediately feels a connection with and also a strong desire to rescue her.

While this could easily be described as a romance, it is not a sappy, fluffy romance at all. It is starker and very complicated. As is often the case in life, people make bad decisions for all the wrong reasons and don't seem to realize that they are hurting themselves and others. I found the progression of the story to be worthy of my attention and I really wanted to see how these characters evolved and learned from their actions. I found myself hoping that Luke, in particular, would learn from his mistakes and from the mistakes by others. It was definitely a worthwhile read and I would recommend it.

Sadie Jones is the author of The Outcast, a winner of the Costa First Novel Award in Great Britain and a finalist for the Orange Prize for Fiction and the Los Angeles Times Book Prize Art Seidenbaum Award for First Fiction; the novel Small Wars; and the bestselling novel The Uninvited Guests. She lives in London.

Friday, May 30th: Books and Movies