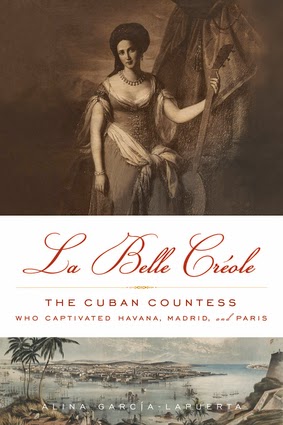 La Belle Creole by Alina Garcia-Lapuerta
Publication date: September 2014 by Chicago Review Press
Description:
Known for her beauty and angelic voice, Mercedes Santa Cruz y Montalvo, la Belle Créole, was a Cuban-born star of nineteenth-century Parisian society. She befriended aristocrats and artists alike, including Balzac, Baron de Rothschild, Rossini, and the opera diva La Malibran. A daughter of the creole aristocracy, Mercedes led a tumultuous life, leaving her native Havana as a teenager to join her mother in the heart of Madrid's elite society. As Napoleon swept Spain into the Peninsular War, Mercedes' family remained at the center of the storm, and her marriage to French general Christophe-Antoine Merlin tied her fortunes to France. Arriving in Paris in the aftermath of the French defeat, she re-created her life, ultimately hosting the city's premier musical salon. Acknowledged as one of the greatest amateur sopranos of her day, she nurtured artistic careers and daringly paved the way for well-born singers to publicly perform in lavish philanthropic concerts. Beyond her musical renown, Mercedes achieved fame as a writer. Her memoirs and travel writings introduced European audiences to nineteenth-century Cuban society and contributed to the debate over slavery. Scholars still quote her descriptions of Havana life and recognize her as Cuba's earliest female author. Mercedes epitomized an unusually modern life, straddling cultures and celebrated on both sides of the Atlantic. Her memoirs, travel writings, and very personal correspondence serve as the basis for this first-ever English-language account of the passionate and adventuresome Belle Créole.

Those who have seen the new book trailer for La Belle Créole have probably noticed the song performed throughout the video. A pianist plays at a grand piano while a soprano sings an emotional, Spanish-like song in a beautiful room in an early nineteenth-century house. The general idea is a recreation of a performance at Mercedes’ salon, but a few keen observers have asked me if this was Mercedes’ own composition. The answer is yes, it is Mercedes’ own work – one she most probably also sang. It has also been almost completely unknown for many years – possibly since her death in 1852.
The story of how we came to record it and hopefully launch it back into the world is one which owes much to many generous and talented people. It was also due to a bit of coincidence and luck.
Sometime last year, when I was still writing the manuscript and even pulling together sources, I found that two of Mercedes’ concert programs had miraculously survived and existed in the Museum of Music History. The programs were the ones she had printed for her private concerts – on her grand salonnights. I had never seen one – but in London I discovered that some long ago English guests had kept not one, but two, tucked away in their engagement diary cum scrapbook. The guardian of this gem was a former professor at the Royal College of Music and he agreed to let me review it there. Meeting him was pure serendipity – I learned so much about the Parisian musical scene from him. He was a living repository of information.
In the course of our conversation, I mentioned that in an old biography of Mercedes, there were some pages of music, seemingly her own composition. The biography contained no further information and I had never found any other reference to the little composition. The professor offered to play it for me so that I would know what it sounded like.
A week or so later, he came to my home and played it for me and my friend Nadine. Using her iPhone, Nadine recorded the event. It was a lovely piece – clearly inspired by traditional Spanish melodies – similar to those Mercedes had sung with her sister Pepita in Madrid. Even in Paris, Mercedes had often performed these Spanish songs – sometimes with castanets – to entertain her friends. A detailed description exists of one memorable evening, with Mercedes singing and dancing to an improvised Spanish song played by Chopin. Our professor pointed out it was a challenging piece for voice and added that Mercedes must certainly have been a talented singer.
While looking at the pages of music, I wondered out loud where or when it had first appeared. I must have looked at these pages countless times throughout the years – yet at that moment, the professor suddenly found the answer. The name was right there on the first page, almost blacked out for some reason, but still visible – yet I had never noticed it! It had appeared in the Correo de Ultramar, a Spanish language journal published in Paris. Something clicked in my brain. I had seen that name before – somewhere. But where? In letters from Cuba? Paris?
Googling soon found the name of the founder and publisher, and THAT name Mercedes had definitely mentioned in her correspondence. In fact, there was even a letter alluding to sending Air Espagnol to him. The year was 1843, in the middle of writing and publishing her famous La Havane and Viaje a la Habana. Where and when were solved. But I have never been able to answer how and why.
The probable date of that composition possibly makes Mercedes Cuba’s first published female composer.
The song stayed with me, but the manuscript had to be finished. Then edited. Still, I kept thinking that it would be wonderful to “resurrect” the song, hear it sung by a soprano, as Mercedes would have sung it, in a beautiful salon. I really envisioned it as the centerpiece to a book trailer… but this seemed a complicated goal. I would need a pianist, soprano, video and sound crew, venue and a video editor. Enter Nadine, once again full of inspiration and contacts. In a whirlwind of activity she recruited concert pianist Olga Jegunova who in turn found soprano Kirstin Sharpin. A crew was already recording Olga for a concert courtesy of the BBC and could also record our piece. The owners of the lovely home and hosts for the charitable concert graciously allowed it to serve as our backdrop, and a wonderful editor was found – recommended by the BBC gang. All was in place and the result was magical!So here is the full performance of Merecdes’ work. Over 170 years since its composition, Mercedes’ bittersweet Air Espagnol, is lost no longer.

Corresponding link to the music (which for some reason won't embed correctly):  https://www.youtube.com/watch?v=MxLz4pt3tWI./ 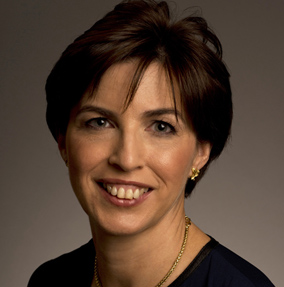 Born in Havana, Alina García-Lapuerta holds degrees in international economics from GeorgetownUniversity's School of Foreign Service and international relations from TuftsUniversity's Fletcher School of Law and Diplomacy and worked for a number of years in banking. Now based in London with her Spanish American husband and their two children, she spends considerable time in South Florida. She is a member of Biographers International Organization and the Biographers' Club.
Alina Garcia-Lapuerta Chicago Review Press guest post La Belle Creole