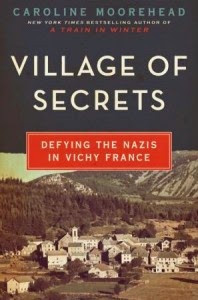 
From the author of the New York Times bestseller A Train in Winter comes the fascinating story of a French village that helped save thousands hunted by the Gestapo during World War II.

High up in the mountains of the southern Massif Central in France lie tiny, remote villages united by a long and particular history. During the Second World War, the inhabitants of Le Chambon-sur-Lignon and its parishes saved thousands wanted by the Gestapo: resisters, Freemasons, communists, and, above all, Jews, many of them orphans whose parents had been deported to concentration camps. There were no informers, no denunciations, and no one broke ranks. During raids, the children would hide in the woods, their packs on their backs, waiting to hear the farmers’ song that told them it was safe to return. After the war, Le Chambon became one of only two places in the world to be honored by Yad Vashem as Righteous Among Nations.

Just why and how Le Chambon and its outlying villages came to save so many people has never fully been told. With unprecedented access to newly opened archives in France, Britain, and Germany, along with interviews documenting the testimony of surviving villagers, Caroline Moorehead paints an inspiring portrait of courage and determination: of what was accomplished when a small group of people banded together to oppose tyranny.

A major contribution to the history of the Second World War, illustrated with black-and-white photographs,Village of Secrets sets the record straight about the events in Chambon and pays tribute to a group of heroic individuals for whom saving others became more important than their own lives.

Village of Secrets was a fascinating book. The set up for the main part of the book takes a bit of time to get through, but is necessary and rather interesting in its own right. The book does a wonderful job of describing how the many unique events, circumstances of chance or geography as well as the people involved were necessary for the Chambon to be the seemingly peaceful oasis in the midst of Vichy France.

Of course, it wasn't all peaceful, but for so  many Jewish children to be hidden and/or taken safely across the border to Switzerland over such a long period of time, something pretty extraordinary had to be going on there. But according to the people of the area, they were only behaving as was their moral duty. I found the history of the area and the reclusive Protestant groups living there to be very interesting on their own. But when you add to that all the work and danger of hiding and caring for children who are being hunted by the Gestapo, the clandestine trips to find hiding places, to bring in supplies, move children from safe house to safe house and even to hide in the woods, you have a story that seems more akin to a movie than real life.

While the topic sounds like it could be an historical adventure/espionage novel, the details necessary to explain the complexities and contradictions of the actual events make it a slower read than a novel, naturally, but so worth the time and effort. I was particularly interested in the stories of some of the resistance workers and how they came to the area. Another extremely interesting aspect was how memories of the time were so controversial and contradictory.

This is a fascinating book and I enjoyed it very much. I would recommend Village of Secrets to anyone interested in World War II, Vichy France, Jewish history, or war in general, and the human reaction to such events. I suspect that I will be pondering this book and the people it describes for some time to come.

Caroline Moorehead is the New York Times bestselling author of A Train in Winterand Human Cargo: A Journey Among Refugees, which was a finalist for the National Book Critics Circle Award. An acclaimed biographer of Martha Gellhorn, Bertrand Russell, and Lucie de la Tour du Pin, among others, Moorehead has also written for the Telegraph, the Times, and the Independent. She lives in London and Italy.