Queen of the Darkest Hour - review 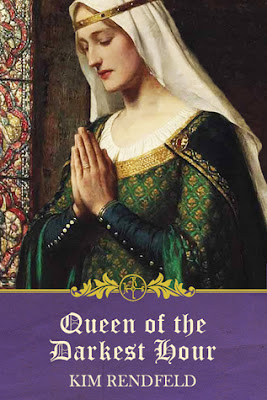 Francia, 783: Haunted by the Saxons’ attack on her home fortress, Fastrada obeys her father and marries Charles, king of the Franks and a widower with seven children and an eighth on the way by a concubine. As more wars loom, Fastrada’s greatest peril lurks within the castle walls: Pepin, Charles’s son by his embittered former wife. Blaming his father for the curse that twisted his spine, Pepin rejects a prize archbishopric and plots with his uncle and mother to seize the throne. Can Fastrada stop
the conspiracy before it destroys the kingdom?

Based on historic events during Charlemagne’s reign, "Queen of the Darkest Hour" is the story of a family conflict endangering an entire country—and the price to save it.

Because I had previously read and very much enjoyed Rendfeld's novel The Ashes of Heaven's Pillar, I was happy for the opportunity to read and review Queen of the Darkest Hour. As with The Ashes of Heaven's Pillar, Queen of the Darkest Hour takes place during the reign of Charlemagne. Instead of telling the story of a peasant family and how they survive the constant warring, we are presented with the story of Fastrada, Charlemagne's third wife.

Little is actually known about her, so Rendfeld is free to bring this woman to life for the reader using her talents as writer and researcher to give us a plausible and very interesting version of her life as the much younger wife and step-mother of her husband's children.

The novel is told from two alternating perspectives - one is Fastrada's and the other is her step-son Pepin, who hates Fastrada and his siblings. In the novel, Pepin has a hunchback and in some histories he did indeed have a hunched back. His physical deformity helps explain why he was skipped over in favor of his younger brother as heir and why he is destined for the church. It also works to explain his anger and hatred towards his step-mother and his siblings.

There is intrigue, betrayal, loyalty, love, hatred, lots of military discussion and plenty of historical detail to keep pretty much any historical fiction fan happy.  I felt that the author did a good job of giving the reader plausible and intriguing possibilities for the characters and events that occurred. I always enjoy reading Kim Rendfeld's books and Queen of the Darkest Hour is no exception.

Kim Rendfeld has a lifelong fascination with fairy tales and legends, which set her on her quest to write The Cross and the Dragon and The Ashes of Heaven's Pillar.

She grew up in New Jersey and attended Indiana University, where she earned a bachelor’s degree in journalism and English, with a minor in French. If it weren't for feminism, she would be one of those junior high English teachers scaring the bejesus out of her students, correcting grammar to the point of obnoxiousness. Instead, her career has been in journalism, public relations, and now fiction.

Kim was a journalist for almost twenty years at Indiana newspapers, including the Journal and Courier in Lafayette, The Muncie Star, and The News and Sun in Dunkirk, and she won several awards from the Hoosier State Press Association. Her career changed in 2007, when she joined the marketing and communications team at Ball State University in Muncie, Indiana. She gets paid to agonize over commas and hyphens, along with suggesting ways to improve writing, and thoroughly enjoys it. She is proud to have been part of projects that have received national recognition.

Kim lives in Indiana with her husband, Randy, and their spoiled cat. They have a daughter and three granddaughters.