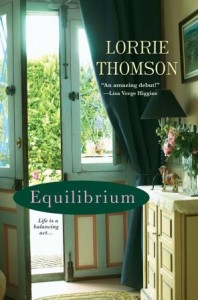 Equilibrium by Lorrie Thomson
Publication date: August 27, 2013
Publisher: Kensington Books
Source: publisher via TLC Book Tours for an honest review
Synopsis:
In the year since her husband died, Laura Klein’s world has shifted on its axis. It’s not just that she’s raising two children alone—fact is, Laura always did the parenting for both of them. But now her fifteen-year-old daughter, Darcy, is dating a boy with a fast car and faster hands, and thirteen-year-old Troy’s attitude has plummeted along with his voice. Just when she’s resigning herself to a life of worry and selfless support, her charismatic new tenant offers what Laura least expects: a second chance.

Darcy isn’t surprised her mom doesn’t understand her, though she never imagined her suddenly acting like a love-struck teen herself. With Troy starting to show signs of their father’s bipolar disorder, and her best friend increasingly secretive, Darcy turns to her new boyfriend, Nick, for support. Yet Nick has a troubled side of his own, forcing Darcy toward life-altering choices.

Exploring the effects of grief on both mother and daughter, Equilibrium is a thoughtful, resolutely uplifting novel about finding the balance between holding on and letting go, between knowing when to mourn and when to hope, and between the love we seek and the love we choose to give.


My Take:
I found Lorrie Thomson's debut novel, Equilibrium, to be quite compelling and a little bit anxiety inducing to read, as a mother of teenagers. I was immediately drawn into Laura's stressful life. Despite the fact that her husband has been dead for nearly a year, she is still immersed in the stress of being his caretaker while continuing to raise their children on her own, just as she did before Jack's suicide. It is as if Laura had spent so many years being the strong, capable, responsible parent and wife, that she didn't know how to take anything from life for herself.

Laura's relationship with her husband, Jack, is revealed slowly throughout the book as flashbacks or reflections on the past. There is so much about Jack and their relationship that just really bothered me. Laura was a student when she met him and despite the fact that she went after him, he was in a position of power and authority and should not have pursued the relationship. This particular beginning to their relationship sort of seemed to set the tone for the rest of their lives together. Jack taking advantage and Laura holding everything together. When one considers the circumstances and Jack's disorder, it becomes clear that Laura did everything humanly possible to take care of her family. Just reading about it stressed me out a little bit.

Despite the hurt she experiences, I was glad that Laura finally began to see her marriage as it really was and to admit that Jack had some culpability in things. Laura definitely performed quite the balancing act. It was nice to see her finally able to live for herself a bit.

I thought teenage Darcy to be a pretty well developed character. She is a grieving, rebellious teenager with a boyfriend with his own problems. Her best friend is going through her own problems and Darcy feels alone and misunderstood. Pretty typical teenager. I felt so bad for her because of her father's suicide, but mostly because of the mind games he played with her and to a lesser extent with her brother, Troy. I have to assume that some of Jack's manipulations are part of his bipolar disorder. At least I hope so.

I enjoyed reading Equilibrium even though it presents Laura's life with all it's many stresses and worries. I found her to be a likable character and I felt empathy for the difficult situation she is in. Equilibrium was a pretty quick read and the characters are sympathetic. While the book deals with the issue of bipolar disorder and its aftermath in the family, there are a few different character story lines to follow and there is even some romance. 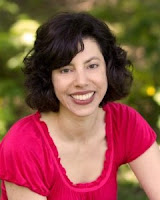 Lorrie Thomson lives in New Hampshire with her husband and their children. When she’s not reading, writing, or hunting for collectibles, her family lets her tag along for camping adventures, daylong paddles, and hikes up 4,000 footers.
Though Equilibrium is fiction, Lorrie had the very real experience of coping with mental illness in her own family when her oldest son was diagnosed with schizophrenia while she was writing the book. For support and education regarding mental illness, she recommends that readers visit NAMI, the National Alliance on Mental Illness.