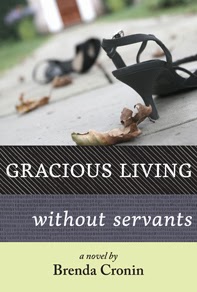 Gracious Living Without Servants by Brenda Cronin
Publication Date: October 7, 2013 by Stoneslide Media LLC
Source: Publisher via TLC Book Tours for an honest review
Synopsis:
Juliet has done the right thing all her life, and where’s it gotten her? She’s a thirty-year-old widow who’s had to move in with her parents.
Things start to look up when her glamorous—but married and much older—neighbor Seth seems to be flirting with her and his wife helps her land a job at a local paper.
Then she’s assigned to investigate Seth’s wife. Juliet is quickly immersed in lies, manipulation, and a deepening sex scandal. But she feels alive for the first time in a long time.

Maybe she needs to do the wrong thing for once. Or maybe she’s headed for disaster.

Gracious Living Without Servants was quite an unusual book. It isn't often that I love a book but disagree with the main character so very much. I found the premise quite promising and interesting, I loved the location and the way the characters are written and the tone sounds right. However, I just could not understand many of Juliet's actions or her motivations for them.

Juliet is a young widow whose husband dies very suddenly and unexpectedly. This is understandably, a very stressful time for her and she is quite fragile at the beginning of the book. For reasons that I cannot fully comprehend, she begins an affair with a much older neighbor - a friend of her parents and old enough to be her father. This alone had me pretty baffled. I have nothing against age differences, but thirty years is a big difference and Juliet knows his wife. In fact, the wife helps get her a job at the local paper.

Perhaps her affair was a gradual way for her to ease back into her life without really committing to it. I don't really know. But once she is assigned - actually, she asks for the assignment - to investigate Naomi, the wealthy wife of Seth, the man she is having an affair with, she certainly should have broken it off. She doesn't break it off and proceeds with the investigation and even asks Seth for information. I found that quite amusing.

Needless to say, there is quite a scandal to be discovered and Juliet finds more than she bargained for. I enjoyed the process and the story line was quite interesting and entertaining. Naomi isn't quite what she pretends to be, and neither is her husband. I had a feeling about parts of what was discovered just due to the descriptions of how Naomi worked, but the rest, well, I will just leave that alone for now. Despite the obvious conflict of interest, Juliet manages to write a good piece and pulls her life together, probably. Maybe. Naturally, there are consequences to her actions. It is difficult to believe that a thirty year old woman wouldn't be able to see the implications of her actions and how the affair would ultimately end.  I was pleased that everything wasn't tied up in a neat little bow. Life is seldom that neat and this story wouldn't have been as good if that had happened.

I really enjoyed the book even though I couldn't understand or condone Juliet's actions. The book was well written and I enjoyed it very much. 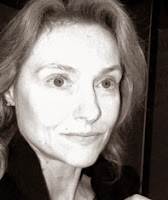 Brenda Cronin writes for The Wall Street Journal, where she has worked since 2001. Her short fiction has been published on both sides of the Atlantic. This is her first novel. Born in Washington, she was raised in Connecticut and lives in New York City.

TBD: Diary of a Stay at Home Mom