The Qualities of Wood blog tour and review 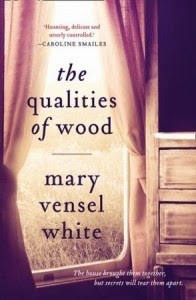 The Qualities of Wood by Mary Vensel White
Publication date: June 17, 2014 by Authonomy/Harper Collins
Source: publisher via TLC Book Tours for an honest review
Synopsis:
When Betty Gardiner dies, leaving behind an unkempt country home, her grandson and his young wife take a break from city life to prepare the house for sale. Nowell Gardiner leaves first to begin work on his second mystery novel. By the time his wife Vivian joins him, a real mystery has begun: a local girl has been found dead in the woods behind the house. Even after the death is ruled an accident, Vivian can’t forget the girl, can’t ignore the strange behavior of her neighbors, or her husband. As Vivian attempts to put the house in order, all around her things begin to fall apart.


My Take:
The way The Qualities of Wood begins, it really feels like it is setting up a suspenseful, thrilling page-turner of a mystery; however, the book is actually more literary and more of a character study than a mystery or thriller.  And that is not a bad thing.

I admit I was expecting a thriller, but I wasn't disappointed by the book, really. I enjoyed how Vivian experiences the grandmother's house and finds out the news of the suspicious death in the woods behind the house. This sets up what seems like a murder mystery, but isn't really. The story shows how small towns can seem secretive and a little peculiar to outsiders. Everyone knows everything about everyone else, but to a newcomer, it can all seem much more sinister than it actually is. White handles this aspect of the story nicely as well as the charms of country/small town life.

While the story touches on aspects of living in a small community, the main focus of the novel turns out to be on relationships. White examines the relationships between Vivian, Nowell, and his troublesome brother Lonnie and his new wife. Despite descriptions by Vivian of how nice and sweet tempered Nowell is, the reader doesn't see much of evidence of this. Vivian makes a lot of excuses for his temper and secretiveness saying that it must be the writer in him. It felt to me more like she was trying to convince herself.

Even though the novel doesn't turn out to be a big murder mystery/thriller, I did enjoy the way White demonstrates just how little we can ever actually know another person. She does this by having Vivian make assumptions about various characters and situations and then she learns just how wrong those assumptions can be.

This was a nice read and I actually enjoyed the journey that Vivian takes to learn a few things about herself, her marriage and about that often asked question of just how well can one person really know another person.

Mary Vensel White was born in LA and graduated from the University of Denver. She lived in Chicago for 5 years where she received her MA at DePaul University. Her short fiction has appeared in The Wisconsin Review and Foothilles Literary Journal. This is her first novel.
Find out more about Mary at her website, connect with her on Facebook, and follow her on Twitter.