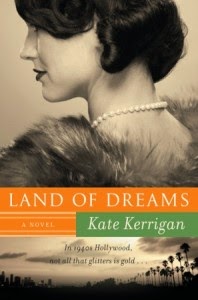 Irish immigrant Ellie Hogan has finally achieved the American Dream. But her comfortable bohemian life on Fire Island, New York, is shattered when her eldest adopted son, Leo, runs away, lured by the promise of fortune and fame in Hollywood. Determined to keep her family intact, Ellie follows him west, uprooting her youngest son and long-time friend Bridie.

In Los Angeles, Ellie creates a fashionable new home among the city’s celebrities, artists, and movie moguls. She is also drawn into intense new friendships, including talented film composer Stan, a man far different from any she has ever met, and Suri, a beautiful Japanese woman and kindred spirit, who opens Ellie’s eyes to the injustices of her country.

While Leo is dazzled by Hollywood’s glitz, Ellie quickly sees that the golden glamour masks a world of vanity and greed. Though she tries to navigate them around the dangers of their new home, she will not be able protect them from an even more terrifying threat: war.

I was thrilled at the opportunity to catch up with Ellie Hogan again and see where Land of Dreams,  the final book in the Ellis Island trilogy took her. Considering her love for New York, I can't say that Hollywood is where I thought Ellie would end up, but it would have been a very different and exciting place to be during the 1940's.

It was interesting to see how Ellie has changed from City of Hope. She has become a well-known artist and spent most of her time on an island painting while Leo was away school. She has lost two husbands and besides her art, raising her two sons is her primary focus. But, as usual, Ellie still has some learning ahead of her. Leo runs off to Hollywood in the hopes of becoming an actor. In a state of panic Ellie follows him and sets up her household there in the attempt to let him pursue his dream while still being able to watch out for him.

As seems to be her talent, Ellie meets and befriends a variety of people from different backgrounds and talents. I enjoyed following along as Ellie finds her way in California - not a place she ever thought to find herself. During her time in Hollywood, Ellie must confront some of her own failings and adjust her own desires to allow her sons to thrive.

I found Land of Dreams to be very entertaining and I appreciated that Ellie has to come to terms with some of her not-so-great tendencies - just like we all do. Kerrigan allows her to experience some cringe-worthy moments - some of those "why can't I just keep my big mouth shut?" kind of moments. Ellie must also learn how to juggle  being true to herself and her creativity while also being a good mother to her sons.

I was quite pleased by the gentleman in her life in this book -- Stan is older, more mature and is able to handle Ellie's strong personality and ambition without being intimidated.  He also holds her accountable for her own behavior and decisions. I found their budding relationship to be fun, challenging and interesting. I think the book will appeal to a fairly wide reading audience. The historical period is interesting as well as the political issues of the time. I found it to be a satisfying conclusion to the Ellis Island trilogy.  I will be suggesting Land of Dreams to my friends just as I did City of Hope.

Kate Kerrigan is the author of three previous novels. She lives in Ireland with her husband and their two sons.
Visit Kate’s website at www.katekerrigan.ie and follow her on Twitter: @katekerrigan.