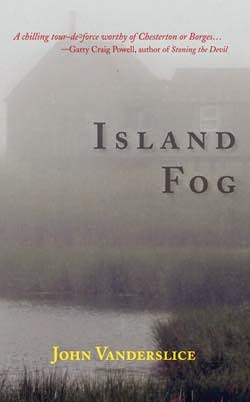 Island Fog by John Vanderslice
Publication date: April 28, 2014 by Lavender Ink
Source: Publisher via TLC Book Tours for an honest review
Description:
Island Fog is a thematic, novel-length collection of stories, all set on Nantucket Island, Massachusetts. Nantucket as we know it began as an English settlement relatively early in the colonial period of the United States. In the heyday of its nineteenth century success as a whaling center, the island, for being as small as it is, was quite the cosmopolitan center. Sailors from across the globe mingled with a mixed local population of descendents of the original English settlers, black Americans, and Native Americans. Today too Nantucket is known as being especially open to visitors from around the world. When one travels there, one feels that one is no longer in the United States but in a culturally indistinct, in-between land, somehow equidistant from North America, the Caribbean, and Northern Europe.

Island Fog captures the physical, social, and political atmosphere of the island from both historical and contemporary perspectives. It is divided into two halves, with the first half containing five historical fictions and the latter half containing six contemporary ones. The first historical fiction is set in 1795, only a decade removed from the young America’s formalized independence from Britain, and the last historical fiction is set in 1920, one year after America’s passage of the infamous Volstead Act (prohibition). The middle three historical stories are set, respectively, in 1823, 1837, and 1846, the period when the whaling industry enjoyed its greatest profitability and the island its greatest wealth. The set of contemporary fictions begin in the late twentieth century and continue into the middle of the first decade of this century. Thus the stories of Island Fog bridge four centuries of Nantucket history.

The first story, “Guilty Look,” fictionalizes the real life Nantucket bank robbery of 1795, an event that famously divided the heretofore peaceful “paradise” into warring factions of Quakers and Congregationalists, Jeffersonians and Federalists. The other historical fictions—through first, second, and third person narration—depict a fraught and potentially violent friendship between a self-assured white adolescent and the half-breed son of the last full-blooded Wampanoag on the island (“King Philip’s War”); the trapped existence of a whaling widow, who while she waits for her disappeared and likely deceased husband has begun to waken to her latent lesbian nature (“On Cherry Street”); the tortured inner life of an ex-captain who has never gotten over having to become a cannibal to survive during one particularly harrowing whaling expedition twenty-eight years earlier (“Taste”); and the exasperation of a lonely African-American school teacher who despite being born and raised on the island still does not feel, and is not allowed to feel, like a native (“How Long Will You Tarry?”).

The six contemporary stories examine a variety of island lives, some of them Nantucket natives but others visitors for whom the island is either a last refuge or an existential prison. Along the way, we meet a carpenter whose wife deliberately jumped off the Nantucket to Hyannis ferry, drowning herself and her infant child (“Morning Meal”); a couple in their thirties who has not recovered, and will not recover, from a series of tragic miscarriages (“Beaten”); a retired businessman who feels thoroughly caught by his marriage to a dominating, materialistic woman (“Newfoundland”); a fortyish leader of ghost walks who is haunted by both a literal ghost and a communication from his former lover (“Haunted”); a Jamaican family trying to establish quasi-American lives for themselves on the island, an effort that a new tragedy at the mother’s workplace threatens to unhinge (“Managing Business”); and, finally, an American student who has given up on college and goes to Nantucket for a prearranged summer job only to find a different job there, one that forces him to reconsider everything he thought he understood about himself, his life, and the island (“Island Fog”).

The focus of every one of the eleven stories in the collection is on the characters populating them: their latent desires and disappointing pasts, their future hopes and drastic, misguided decisions.  These are stories, not treatises on American cultural history. Yet by gathering together in one place all these pieces, a provocative and even cutting picture of Nantucket—its physical beauty, its social tensions, its preening hypocrisies—inevitably arise, making Island Fog far greater than the sum of its gorgeous, sorrowful parts.

Island Fog by John Vanderslice is one of the best short story collections I have ever read. I agreed to read and review for the tour because I like stories that take place in Nantucket and I was curious about this book. The title of the collection is perfect. Once a couple of stories have been read, this starts to become clear. After reading all the stories, I couldn't have thought of a better title. It evokes the feeling of the collection as a whole. This is not the stereotypical version of Nantucket that many of us are used to reading about. This is the truer, rest-of-the-year version of Nantucket, the historical, the other version that is also a big part of the island and its mystique.

The first section has stories that are historical fiction with some of the stories inspired by actual historical events. I found these stories really appealing in a dark, shadowy way. Each one is unique but they all share a feeling of isolation, sorrow, or helplessness. The weird thing is, I can't choose a favorite story because I really like all of them for a different reason. "Guilty Look" is a type of mystery set in Nantucket, 1795. There is a bank robbery and the reader follows the story as the various people work on "solving" this crime. The crime appears to be an inside job, and brings to the surface the different factions living on the island. The leaders of the Quakers seem to be using this event to consolidate power. I really enjoyed this story even though I was cringing and hoping what I knew was going to happen - wouldn't happen.

"Taste" is another of the historical fiction stories that really stood out for me. It is dark and upsetting, but so fascinating as well. It tells the story of a whaler who comes back home after a horrific encounter with a whale that left him and a few crew members stranded. The rumors and whispers that followed him after his return have had lasting consequences. Also, the rumors may not be false. This story was just so creepily fascinating. And disturbing. And dark.

The contemporary fiction stories are quite good as well. I think the two that really stood out for me were "Managing Business" and "Island Fog".  "Managing Business" is the story of hard work, societal differences, frustration, ambition, and consequences. "Island Fog" was the most surreal and haunting of the the stories.  It is almost paranormal and reminded a little bit of something that Neil Gaiman might write. This one stayed with me for awhile.

Honestly, I would probably suggest Island Fog to many different types of readers. This is a collection that I feel would appeal to readers of historical fiction, contemporary fiction, science fiction/fantasy and paranormal fiction. There is a broad range of people and issues and historical periods covered. I thoroughly enjoyed reading Island Fog. 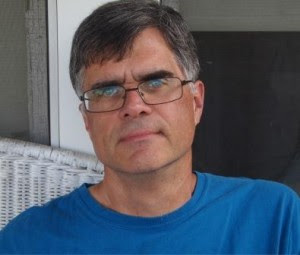 John Vanderslice teaches in the MFA program at the University of Central Arkansas, where he also serves as associate editor of Toad Suck Review magazine. His fiction, poetry, essays, and one-act plays have appeared in Seattle Review, Laurel Review, Sou’wester, Crazyhorse, Southern Humanities Review, 1966, Exquisite Corpse, and dozens of other journals. He has also published short stories in several fiction anthologies, including Appalachian Voice, Redacted Story, Chick for a Day, The Best of the First Line: Editors Picks 2002-2006, and Tartts: Incisive Fiction from Emerging Writers.  His new book of short stories, Island Fog, published by Lavender Ink, is a linked collection, with every story set on Nantucket Island, Massachusetts.