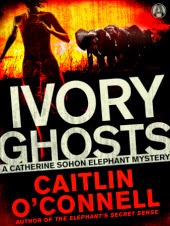 In a blockbuster debut thriller brimming with majestic wildlife, village politics, and international intrigue, a chilling quadruple homicide raises the stakes in the battle to save Africa’s elephants.


Still grieving over the tragic death of her fiancé, American wildlife biologist Catherine Sohon leaves South Africa and drives to a remote outpost in northeast Namibia, where she plans to face off against the shadowy forces of corruption and relentless human greed in the fight against elephant poaching. Undercover as a census pilot tracking the local elephant population, she’ll really be collecting evidence on the ruthless ivory traffickers.
But before she even reaches her destination, Catherine stumbles onto a scene of horrifying carnage: three people shot dead in their car, and a fourth nearby—with his brain removed. The slaughter appears to be the handiwork of a Zambian smuggler known as “the witchdoctor,” a figure reviled by activists and poachers alike. Forced to play nice with local officials, Catherine finds herself drawn to the prickly but charismatic Jon Baggs, head of the Ministry of Conservation, whose blustery exterior belies his deep investment in the poaching wars.
Torn between her developing feelings and her unofficial investigation, she takes to the air, only to be grounded by a vicious turf war between competing factions of a black-market operation that reaches far beyond the borders of Africa. With the mortality rate—both human and animal—skyrocketing, Catherine races to intercept a valuable shipment. Now she’s flying blind, and a cunning killer is on the move.
“The scientist that Caitlin O’Connell is shines through her first work of fiction, a thriller set against the illegal ivory poaching trade in Africa. With descriptions and dialect so real you feel as if you might be turning pages while sitting deep in the bush, and a skillful narrative that teaches while it thrills, this novel is a win for any animal lover or reader with a conservationist’s heart.”—Jodi Picoult, #1 New York Times bestselling author of Leaving Time

MyTake:
From the very first page of this exciting novel I was completely caught up and interested in Catherine and her mission and in the local situation. Ivory Ghosts begins as Catherine is making her way to her new home for the next few months and she blows out a tire. Her day quickly goes downhill from there as she comes upon another car that appears to have hit a large animal and there are signs that the car had been filled with poachers. This pretty much sets the tone for the rest of the book.

Catherine and the reader are never quite sure who can be trusted and who is hiding something. The mystery is troubling and the novel brings out the complexity of the issues at hand. There is the safety of the elephants, which is of course a priority for Catherine, but there is also the reality of life in close proximity to elephants and the dangers that go with it. Corruption is widespread and it isn't clear exactly who is involved and at what level. Then the additional problem of increasing tribalism in the area adds another troubling issue to the mix.

There is a budding romance within the novel, and unlike many mystery/thrillers, it actually adds to the plot and makes sense within the story. I thought their developing relationship worked really well and added to the overall tension.
Caitlin O'Connell's love for elephants and Africa is clear on every page of the book. The descriptions of the plant life and the animals is just amazing. I have never had an interest in going to Africa, but some of the descriptions of the terrain, the sounds of the wildlife in the book make the place sound amazing. . I will enthusiastically recommend Ivory Ghosts to friends and family. Also, I loved the title of the book, with the images it brought to my mind and the deeper truth to it. Ivory Ghosts has stuck with me since I finished reading it and the ghosts of the elephant families haunt my thoughts. I am excited at the prospect of reading more Catherine Sohon books soon.

A world-renowned expert on elephants, Caitlin O’Connell holds a Ph.D. in ecology and is a faculty member at the Stanford University School of Medicine as well as director of life sciences for HNu Photonics. She is the author five nonfiction books about elephants, including the internationally acclaimed The Elephant’s Secret Sense, An Elephant’s Life, A Baby Elephant in the Wild, and Elephant Don, and co-author of the award-winning The Elephant Scientist. She is the co-founder and CEO of Utopia Scientific, a nonprofit organization dedicated to research and science education, and the co-founder of Triple Helix Productions, a global media forum with a mandate to develop more accurate and entertaining science content for the media. When not in the field with elephants, O’Connell divides her time between San Diego, California, and Maui, Hawaii, with her husband, Tim Rodwell, and their dog, Frodo.