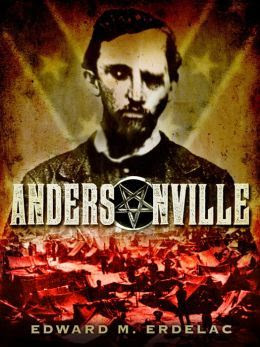 Readers of Stephen King and Joe Hill will devour this bold, terrifying new novel from Edward M. Erdelac. A mysterious man posing as a Union soldier risks everything to enter the Civil War’s deadliest prison—only to find a horror beyond human reckoning.
Georgia, 1864. Camp Sumter, aka Andersonville, has earned a reputation as an open sewer of sadistic cruelty and terror where death may come at any minute. But as the Union prisoners of war pray for escape, cursing the fate that spared them a quicker end, one man makes his way into the camp purposefully.

Barclay Lourdes has a mission—and a secret. But right now his objective is merely to survive the hellish camp. The slightest misstep summons the full fury of the autocratic commander, Captain Wirz, and the brutal Sergeant Turner. Meanwhile, a band of shiftless thieves and criminals known as the “Raiders” preys upon their fellow prisoners. Barclay soon finds that Andersonville is even less welcoming to a black man—especially when that man is not who he claims to be. Little does he imagine that he’s about to encounter supernatural terrors beyond his wildest dreams . . . or nightmares.
Advance praise for Andersonville

“The true story of Andersonville is one of unimaginable horror and human misery. It’s a testament to his unmatched skill as a storyteller that Edward M. Erdelac is not only able to capture that horror but to add another level of supernatural terror and reveal that the darkest evil of all resides in the human soul. Highly recommended to fans of horror and history alike.”—Brett J. Talley, Bram Stoker Award–nominated author of That Which Should Not Be and He Who Walks in Shadow

“Andersonville is a raw, groundbreaking supernatural knuckle-punch. Erdelac absolutely owns Civil War and Wild West horror fiction.”—Weston Ochse, bestselling author of SEAL Team 666
“Edward M. Erdelac is a master of historical reinvention. In Andersonville,he peels away the façade of history to reveal the horror and sacrifices that led to the end of the Civil War. Clandestine operations, mystical battles waged unseen, and unlikely heroes combine to save a nation, not only from itself but from the demonic forces threatening to tear the whole of existence asunder. Forget what you know about the War Between the States, this is the story we should have been taught.”—Tim Marquitz, author of the Demon Squad series


Andersonville, by Edward Erdelac had my attention and interest from the very first page. Just why was this black man trying to get on a Confederate prison train? It makes no logical sense and had me intrigued. To say that Barclay Lourdes is a complicated and mysterious protagonist would be an understatement. I was fascinated with his story and his skills and couldn't wait to find out why he was trying to get into Camp Sumter, better known as Andersonville, when most people would be doing all they could to go in the opposite direction.

The harsh and brutal reality of this actual Confederate prison camp is enough to give anyone nightmares. Unfortunately, Barclay is determined to get into the camp and find out what exactly is going on and if the reports are true. Exactly who Barclay is and why he has ended up here are revealed slowly but effectively.

The descriptions of the conditions inside the camp are harrowing and don't need a supernatural aspect to make them the stuff of nightmares. The supernatural aspect does fit with the atmosphere and worked well with the overall inhumane conditions within the camp. I found the story line involving Barclay's history and his family/friends to be very interesting and I was caught up in both the current story and the past.

Because I really liked the way things are slowly revealed and the way the back story is gradually added along the way, I don't want to reveal too many specifics. But Andersonville is one of those books that really stuck with me and the conditions, events, people, kept running through my thoughts even when I wasn't reading the book.  I had to look up information about some of the historical characters and Andersonville itself. I was impressed with how closely the author stuck to the historical record while weaving his own narrative into it.

While I believe that Andersonville is a standalone novel, I was intrigued enough by Barclay, his life, and his specific talents and training, that I would love to read more about him. I think that Andersonville would definitely appeal to those readers who like horror, historical fiction, reading about the Civil War and those who like something just a bit different. This is one of those novels that I won't soon forget and will be recommending to friends. 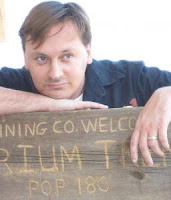 Edward M. Erdelac is a member of the Horror Writers Association and the author of six novels (including the acclaimed weird western series Merkabah Rider) and several short stories. He is an independent filmmaker, award-winning screenwriter, and sometime Star Wars contributor. Born in Indiana, educated in Chicago, he resides in the Los Angeles area with his wife and a bona fide slew of children and cats.
.