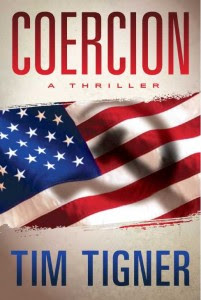 The phone rings and the offer is made, leaving you only seconds to decide. Betray your country, or watch your family drop dead before your eyes.

After the Iron Curtain’s collapse, Russia appears to be finished as a superpower. But KGB general Vasily Karpov is secretly working to restore Russia’s status by forcing Americans into traitorous acts of espionage and sabotage, with the aid of a new secret weapon. Meanwhile, his biggest target is within Russia, where Karpov is plotting to capture the Kremlin for himself.

Former US soldier and spy Alex Ferris becomes the first to fathom Karpov’s grand plans. Racing from San Francisco to Siberia, Alex must elude ambushes, assassins, and death from exposure as he wages a one-man war against a growing global threat and the resurgence of the Soviets.

“Tim Tigner is a masterful storyteller with a nose for intrigue and a careful eye for historical detail. Set in the aftermath of the collapse of the Iron Curtain, his latest book, “Coercion,” is a compelling tale of espionage and betrayal, one that will leave its readers wanting more.”  — James A. Baker, III, 61st U.S. Secretary of State

Coercion by Tim Tigner is a fast-paced spy thriller that grabs the reader's attention quickly and holds it to the end. There are many characters to follow, but the protagonist is Alex Ferris, who had formerly been in Special Forces and  intelligence and now is an International Private Investigator who is investigating his twin's suspicious death.  The death of his twin winds up being far more than he had imagined and leads him on an international quest for answers.

I was pulled into the story from the start and only hit a few snags at first in trying to keep all the characters straight. There is a handy cast of characters in the front of the book for those who need it, but for readers like me who forget it is there, just keep reading - the author is very good at giving all the necessary clues to figure out who is who. Once I got a few chapters into the book, I no longer had that problem though.

Coercion has pretty much everything needed for a very fun and exciting spy thriller. The hero is smart and dashing and is always ready for whatever is thrown his way. The villains are really, really  bad, but there is plenty there to make them interesting and not too cliche. The methods, technology, and the  vehicle for their ability to coerce strategic people to do their bidding is ingenious and evil --- the stuff of nightmares, really -- so the reader is really hoping for Alex to succeed in stopping these people.

It seems pretty evident from the novel itself and the author bio that the author has an intensive knowledge of science and international politics and the topography of Russia. This really helps to set the story up and maintains its authentic feel.

I did like that there is back story that helps to explain how certain people got to where they are, but I especially liked the twists and turns the story takes. There are a couple of big ones.

I really enjoyed Coercion and thought it was a great thriller. I think that Coercion will appeal to a pretty wide range of readers, especially those who like international intrigue and spy thrillers. 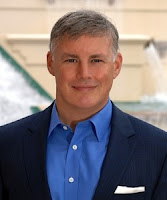 Tim began his career in Soviet Counterintelligence with the US Army Special forces, the Green Berets. With the fall of the Berlin Wall, Tim switched from espionage to arbitrage. Armed with a Wharton MA rather than a Colt M16, he moved to Moscow in the midst of Perestroika. There he lead prominent multinational medical companies, worked with cosmonauts on the MIR Space Station (from Earth, alas), chaired the Association of International Pharmaceutical Manufacturers, and helped write Russia’s first law on healthcare.

Moving to Brussels during the formation of the EU, Tim ran Europe, Middle East, and Africa for a Johnson & Johnson company and traveled like a character in a Robert Ludlum book. He eventually landed in Silicon Valley, where like minds with wild ideas come to congregate around the creation of (nightmares and) dreams. Now he launches new medical technologies as a startup CEO, and devises devious devices for fictional characters who aim to change the world.

Tim grew up in the Midwest and Europe, earning a BA from Hanover College and then a MBA in Finance and a MA in International Studies from the University of Pennsylvania. He now lives with his wife Elena and their two daughters in Northern California.

Friday, September 18th: The World As I See It