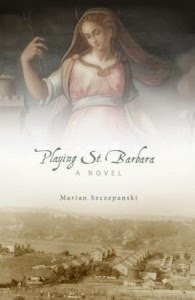 Playing St. Barbara by Marian Szczepanski
Publication date: August 1, 2013 by High Hill Press
Source: Author via TLC Book Tours for an honest review
Synopsis:
In the Depression-era coal patch known as The Hive, miner’s wife Clare Sweeney keeps secrets to survive. Stripped of her real name, she hides her friendship with a town pariah, haunting guilt around the deaths of her three infant sons, and determination never to bear another. She defies her abusive husband and the town’s rigid caste system to ensure a better future for her daughters, who harbor secrets of their own.
Deirdre conceals her attraction to a member of the despised Company police. Katie withholds her plans for a college education—and the convent—from her high school sweetheart.  And Norah suppresses the cause of her mother’s frequent miscarriages, the devastating memory of one brother’s death, and her love for a married man.

The four women’s intertwined lives eerily mirror the 7th century legend of St. Barbara, patroness of miners, reenacted annually in the town pageant. Each daughter is cast as St. Barbara, but scandal and tragedy intervene, allowing just one to play the coveted role. In turn, they depart from The Hive, leaving Clare to endure her difficult marriage—till a mine explosion rocks the town. Forced to confront the ghosts of her past, she faces a life-changing choice. Her decision will test her capacity to forgive and challenge her to begin a courageous journey to self-redemption.

When I closed the book after I had finished reading Playing St. Barbara, I had so many thoughts swirling around in my head. I didn't know where to focus my review because there were so many possibilities.  The book takes place in a depression-era mining town called The Hive. The descriptions of the town, the company store, the tension between management families and the miners' families, the hard life lived by the miners are all described with just enough detail to evoke the images and feelings, but not so much as to overwhelm the reader.

Clare is married to Fin Sweeney, the best baseball player on the company team and the most notorious drunk as well. He talks with his fists and has some very firm ideas about how the women in his house should act. Clare and her daughters are complex characters with their own secrets and motivations. I really felt for Clare and her deeply buried resentment towards Fin for many reasons, not only the physical abuse.

Each women tells her story in turn and the reader is able to get to know the person each one truly is - not the role assigned to them by their father or husband, or the town, or society. Some take longer than others to find their voice and the truth of the person they want to be, but they each do so. They grow as people and as family.

Each of the women has her own reasons for wanting to leave, and each is interesting and I grew to like and hopefully understand each of them a little bit. But, for me, Clare was the one that really pulled at my heart. As I write this, I keep thinking of things about Deirdre, Katie and Norah that really stuck with me, but I will try to focus on Clare. I expected at least a little bit that the girls would find their voices and be able to make lives for themselves because of their youth. Clare, however, was another matter. She had given up a part of her identity when she married Fin because he insisted that she do so. He made her change her name and stop speaking her native language, which was German. He constantly denigrated her for her family's heritage even though she was born in the U.S. I found this cruelty and ignorance to be hard to comprehend. And it seemed that Clare really held a deep seated resentment about this.

After so many years of abuse, ridicule, shame for her husband's behavior, and the generally hard life of a miner, it seemed that Clare may not have it in her to fight for herself. However, despite all her own guilt over a tragic event and the abuse at the hands of her husband, she still manages to retain one tiny shred of control over her own life throughout all of this. This gave me hope for her.

I enjoyed reading how Clare takes back her life and her self so much. That whole section of the book was just a balm to this reader's soul. Despite all the heartache, poverty, social pressure, domestic pressure, Clare finally gets to discover who she really is.

The book touches on so many things while telling the stories of these amazing women. It reflects the historical period including many of the social issues of the era: unions, race and ethnic issues, women's issues -- so many of them, workers' rights, politics. There was so much going on in the country and the world and these things are seen through the eyes and experiences of these women.

I just loved this book so much. I will have to read it again soon. This is one of those books that I will be recommending to anyone and everyone.

The granddaughter of immigrant coal miners, Marian Szczepanski grew up in southwestern Pennsylvania and lived as a young child in the Jamison Coal Company house where her mother and aunts were raised. She holds an MFA in fiction from the Program for Writers at Warren Wilson College and has won awards for short fiction and magazine feature writing.  Playing St. Barbara is her first novel. She lives in Houston, Texas.

Friday, February 7th: Diary of a Stay a Home Mom