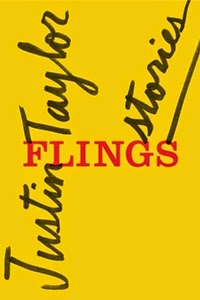 In a new suite of powerful and incisive stories, Justin Taylor captures the lives of men and women unmoored from their pasts and uncertain of their futures.
A man writes his girlfriend a Dear John letter, gets in his car, and just drives. A widowed insomniac is roused from malaise when an alligator appears in her backyard. A group of college friends tries to stay close after graduation, but are drawn away from—and back toward—each other by the choices they make. A boy’s friendship with a pair of identical twins undergoes a strange and tragic evolution over the course of adolescence. A promising academic and her fiancé attempt to finish their dissertations, but struggle with writer’s block, a nasty secret, and their own knowledge of Freud.

From an East Village rooftop to a cabin in Tennessee, from the Florida suburbs to Hong Kong, Taylor covers a vast emotional and geographic landscape while ushering us into an abiding intimacy with his restless, unforgettable characters. Flings is a commanding work of fiction that captures the contemporary search for identity, connection, and a place to call home.

I never know quite how to approach a review of a short story collection. Flings is no different, except that I have to stop myself from going into too much detail about individual stories. As always, I enjoyed some stories more than others, but many of these stories stayed in my thoughts long after I had finished reading them. That is what really struck me about this collection - while not necessarily happy or pleasant, the people and situations felt very real and difficult so they kind of cling to the edge of memory and haunt and taunt. These stories are really intriguing in the way some of the same characters reappear through the collection giving a different perspective on previous stories.

While many stories have nothing to do with the others, there is a continuous feeling of the characters being adrift in some way throughout the book. It is interesting that while many of the characters are in mid to late twenties, there are also some younger and older characters who are also experiencing the drifting and loss, albeit for different reasons.

Flings didn't leave me feeling upbeat or happy, but I did feel contemplative after finishing it. I think that "Sungold" may be my favorite in the collection. This story didn't go where I thought it would and I was glad. This is the story that starts out with the guy in the restaurant mascot costume. Totally worth reading. I was also particularly struck by "Carol, Alone". This was a quirky and sad, but I really liked Carol.

If you like short stories, Flings is definitely worthwhile. I found it to be a bit haunting and very memorable.

Justin Taylor is the author of the story collection Everything Here Is the Best Thing Ever and the novel The Gospel of Anarchy. He lives in New York City.